Asia is expected to register the highest refinery Fluid Catalytic Cracking Units (FCCU) capacity additions globally between 2022 and 2026, accounting for approximately 48% of the total capacity additions by 2026, according to GlobalData, a data and analytics company. Fluid catalytic cracking, a type of secondary unit operation in a refinery, is primarily used in producing additional gasoline in the refining process.

Unlike atmospheric distillation and vacuum distillation—physical separation processes—fluid catalytic cracking is a chemical process that uses a catalyst to create new, smaller molecules from larger molecules to make gasoline and distillate fuels.

Of this, 662 mbd of capacity is likely to be from new-build refineries while the remaining will come from the expansion of existing refineries.

China and India will account for almost 85% of FCCU capacity additions in Asia by 2026. The FCCU expansion project at the Vadinar refinery, India, is the largest upcoming project in Asia with 187 mbd of capacity expected to be added in 2024. Among new build refinery projects, the planned Yulong refinery in China is likely to add a capacity of 141 mbd in 2024. 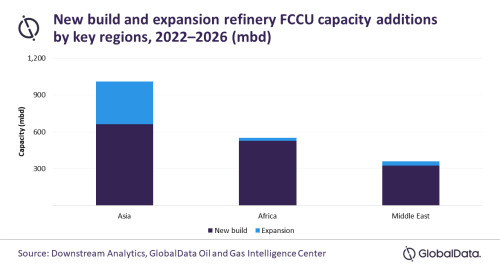 GlobalData identifies Africa as the second highest contributor to the global FCCU capacity additions, accounting for 26% of the total additions by 2026. Nigeria will account for a majority of the capacity additions in the region, with 234 mbd of capacity expected to be added by 2026 from three new-build projects in the country.

Middle East ranks third globally contributing around 17% of global FCCU capacity additions by 2026. Duqm IV in Iran and Shahid Ghasem Soleimani in Oman are the two refineries that are likely to be the highest contributors in the region with 75 mbd of capacity each, which are expected to become operational by 2025.

The last thing we need is to continue burning fossil fuels.