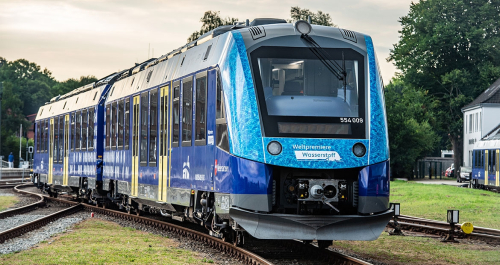 The Coradia iLint trains were developed by Alstom as an alternative to conventional diesel trains. They are powered by Cummins fuel cell systems that convert hydrogen fuel into energy and turn existing, non-electrified infrastructure into zero-emission rail lines. The systems allow the train to emit only steam and condensed water while in service and operate with low noise levels that improve both operator and passenger comfort.

The trains based in Lower Saxony will be the first full fleet in passenger operation and are owned by Landesnahverkehrsgesellschaft Niedersachsen (LNVG). Cummins will provide an additional 54 fuel cell systems to Alstom for an order of 27 Coradia iLint trains that will be delivered to the Frankfurt metropolitan area.

What do they make the hydrogen from ?

The hydrogen is to be supplied by the Linde group, who will produce it on site at the filling locations by electrolysis from renewables.

' The Linde Group will erect and operate the first hydrogen filling station for trains in Bremervörde. The necessary investment costs will be estimated at around €10 million (US$11.6 million) funded by the Federal Government. LNVG will rent the premises for the filling station from evb and will make it available to Linde AG, which will also be responsible for the operation and construction permit. The on-site production of hydrogen by electrolysis and by means of wind energy will be planned in a later phase of the project. '

It looks as though 'the future' is still to come at Linde!
This from 3 days ago:

I'm guessing Linde are currently producing liquid hydrogen at Leuna for the trains, then transporting it by truck to the filling station:

' Linde has doubled the H2 liquefaction capacity at its Leuna site in Germany and has commissioned a second plant in early 2021. In addition, Linde continues to expand its production capacity for green hydrogen by constructing the world's largest PEM (proton exchange membrane) electrolyzer at its Leuna site, planned to start production in 2022. The electrolyzer is being built by ITM Linde Electrolysis, a joint venture between Linde and ITM Power. With a capacity of 24 megawatts, this project is a crucial step for the growth of clean energy in Germany.'

Wonder why the decision was made to go H2 rather than retrofit the line with overhead electric using pantographs, which are more efficient? Up front costs, perhaps?...or,..??

Yeah, it costs a lot of money to electrify a track, however you do it, overhead or on the ground.

There are loads more miles electrified in Europe than in the US, but the traffic just can't justify it for many routes, so for Germany they still have, from memory, something like 4000 diesel trains.

That is a lot of pollution and a lot of carbon.

They ran the figures for batteries etc, but hydrogen was what came out at the top in Europe, save for limited shunter applications.

If you follow the links there, the analysis goes as deep as you want to take it.

It is worth mentioning though that they noted then in May 2019 that some cases already showed lowed total cost of ownership against diesel for fuel cells.

The massive rises in fuel costs now mean that it is open and shut, I would imagine in every case, and it is simply a question of how fast they can be rolled out, throughout Europe, not just Germany.

And the provision of hydrogen filling stations with on site electrolysis will mean that there is local supplies of hydrogen for other applications too, for instance heavy trucking.

I'll just mention that notions that batteries can do the job are entirely fanciful for most routes.

Fill up a fuel cell train and you are good to go for 1000 km or whatever, an impossible task for batteries where the increased weight of trying to get more range rapidly becomes impossible.

On some routes regen braking, fast charging at stations or whatever might work, but there would be loads of route ( and temperature ) specific fiddling around.

For fuel cell trains, once you have some filling stations, you can just drop in them in as one for one replacement with diesel, and they can do whatever a diesel train can do, but without clouds of nastiness.

@ Davemart:
I'd like to remind you to one of your recent comments, that in principle there are also two sides to H2; just like a coin. Not everything about H2 is positive but that is the only side that you concentrate on.
By employing REs for the production of "green" H2, 30 % of RE is lost during electrolysis. The FC itself signs for a further loss of RE due to its rating of 60% eff. amounting to a total loss of almost 60 %. Hydrogen leakage can be reduced but not avoided and this leakage is the most detrimental part no matter at which point in the complete chain that it occurs.
Until such points of dissension have been lowered close to nil or even been eliminated, I'll never accept a H2 economy because it is all else but economical and pollution-free.

Never mind the sweeping generalisations 'from first principles' and godlike statements about what you will or won't accept.

The case for fuel cell trans in Europe is open and shut, and that is what real engineers are specifying.

It is absurd to hone in on leakage as though that were the sole criteria.

You have previously in another post massively distorted your own link on the subject.

I believe that for most cases battery electric is more than sufficient. You are not going to use these trains for 1000 km journeys. They are mostly used for commuter or branch lines where the length of the journey is less than 200 km and mostly less than 100 km. Hydrogen fuel cells are both energy and financially expensive. My prediction is that after playing with Hydrogen for a few years, they will be converted to battery electric which will be a relatively easy conversion. At least this is better than my prediction for Toyota's fuel cell cars which I believe will have a premature end in a recycle facility.

There are a number of practical uses for green hydrogen such as the manufacture of ammonia but in most cases using hydrogen for fuel cells is a waste of energy and money and Europe and especially Germany is going to be short of energy and natural gas this winter. Also, I noted that Linde's green hydrogen is apparently a future thing but in any event, this is not a good use of hydrogen, green or not.

Well, that is not what the extensive figures in the analyses I have attached show.

I am not sure how you think batteries are to be charged when renewables don't happen to be about, which is one of the issues hydrogen solves.

In this case, since the hydrogen is to be generated on site, even leakage issues do not apply.

Personally I am cheering on that this is as convenient as diesel whilst being way cleaner and with vastly reduced GHG, and what is more cheaper than diesel.

If batteries ever reach the point where they really can be conveniently be slotted in the application, well and good, storage issues aside.

They are not remotely near that point yet.

"Never mind the sweeping generalisations 'from first principles' and godlike statements about what you will or won't accept."
You ought to heed your own advice that you so thoughtlessly pass on to others.

I would have replied sooner but I had taken a short off-road trip to the wilds of Northern Nevada where there is little or no connectivity except for satellite. Anyway, I read some of your reference. They had 3 cases for the multi-unit trains. In the first the battery electric had a slightly lower cost but most of the line had overhead wire. In the second case with a 165 km route, their projected costs for battery electric and hydrogen fuel cell were close and the third case with a higher use density and 300 km, the overhead wire had a lower projected cost but the battery and fuel cell cost were close.

I dug out some information on the Alstom multi-unit cars. I was going to guess that they had 300 kW power per car but it is actually 315 kW. The top speed is 140 km per hour but the average speed would probably not exceed 100 km per hour. The average power is probably about half the max, so 2 hr trip would use about 315 kWhr but you would want some excess and you would need some power for lighting and heating or cooling so maybe something around 450 to 500 kWhr. Anyway, this is not unreasonable for battery electric. I also noted that Alstom, along with Siemens, is building battery electric multi-unit rail cars but most of their business is with overhead wire rail cars.

My main complaint with using hydrogen fuel cells is that the required energy is more than twice that of battery electric and at the moment, most places do not have clean power to waste. Europe, in particular, is going to be short of energy this winter and can not afford to waste any.

I just read that Pacific Harbor Lines which is a California switching (or shunting) railroad that mostly puts together container trains that are up to 16,000 ft (5 km) long at the ports of Los Angles and Long Beach is waiting for their first battery electric locomotive and expect to fully battery electric by 2030. The first locomotive which is built by Progress Rail, a Caterpillar affiliate, will have a 2.4 MWhr battery and is expected to run 24 between charges. Progress Rail is planning on offering battery electric locomotives with up to 14.5 MWhr of energy capacity.
See: https://s7d2.scene7.com/is/content/Caterpillar/CM20220627-26f7e-6007b

Also for a German take on hydrogen, see:
https://www.youtube.com/watch?v=AGTjKJHu99c&ab_channel=DWPlanetA