By investing in Sustainable Energy, NYK will support the commercialization of this innovative technology and jointly study the generation of energy raw materials from organic waste such as garbage and sludge using an ISOP system installed on a vessel.

In the future, NYK, together with Sustainable Energy, will promote the realization of decarbonization of ships through research and development, such as applying the generated energy raw material as fuel for vessels.

The ISOP system comprises equipment that decomposes organic substances such as flammable waste into low-molecular-weight compounds using subcritical-water-treating technology. Subcritical water is liquid water that is held by pressure at a temperature higher than its natural boiling point of 100 °C.

The products can be reused as green energy products such as bio-coal, biogas (e.g., methane and hydrogen), bio-coke, and the like. The ISOP system is an environmentally friendly system that does not generate harmful substances such as dioxins, unlike existing incinerators. 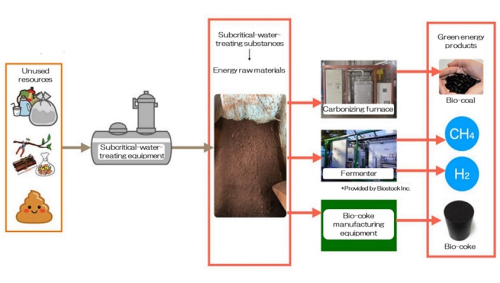 The ISOP system does not require waste segregation and is effective for flammable waste, vinyl and plastic, styrene foam, clothing, food waste, organic sludge, animal manure and sludge, wood chips, and almost all other organic substances.

The ISOP system can be made larger or smaller, and even movable vehicle-mounted models are being developed. The system is expected to be used in a variety of situations, such as urban-area office buildings, municipalities, and disaster areas, among others.