MintAir Co. Ltd. signed a Letter of Intent (LoI) with Jaunt Air Mobility LLC to form a strategic partnership and to purchase Jaunt Journey electric vertical takeoff and landing (eVTOL) aircraft. MintAir has agreed to order up to 40 of Jaunt's aircraft to bring air mobility services to the Korean markets. MintAir will serve as Jaunt’s exclusive Advanced Air Mobility (AAM) partner in the Korean market. 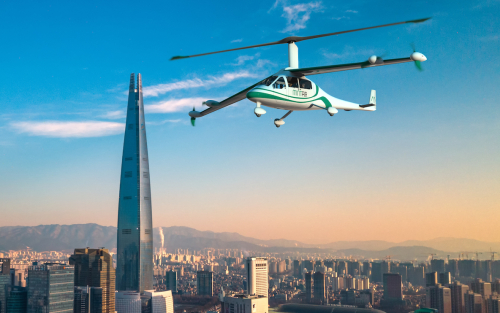 Jaunt is approaching the design and certification of an eVTOL utilizing Slowed Rotor Compound (SRC) technologies and partnerships with Tier 1 aerospace suppliers.

The SRC technology slows the rotor once aloft (the rotor tip speed equaling the aircraft’s pace) thereby reducing drag and associated vibration. In combination with a small wing sized for cruise, this produces a lift to drag ratio equivalent to a fixed wing airplane providing an exceptionally efficient flight with very low noise, according to Jaunt.

In the event of a total loss of propulsion, the aircraft can perform a safe, controlled landing by autorotating or gliding, the company says.

MintAir is building an AAM service in the Republic of Korea and will work with Jaunt to launch commercial passenger air transportation operations in several Korean markets. MintAir intends to launch AAM services with a particular type of eVTOL design, electric rotorcraft with a single main rotor such as the Jaunt Journey.

Jaunt Air Mobility aircraft will be designed and manufactured in Montreal, Canada.

Jaunt appear to be relatively far along on the testing and certification pathway:

I'm not too keen on reliance on fast charging rather than battery swapping, and the relatively limited range, considering conditions are frequently adverse.

But what do folk here with infinitely more knowledge than I think?

Volocopter seems to be 'faking it until you can make it' with doctored take off and landing videos, running take off backwards for the landing.....