H2Carrier is the designer and owner of the proprietary floating energy production and storage system P2XFloater—the first industrial-scale floating green hydrogen and ammonia facility of its kind in the world. The concept is based on proven floating production, storage and off-take technologies combined with an e-control system capable of balancing renewable electricity feedstock through a fully integrated PEM and Haber-Bosch system. H2Carrier will build, own and operate a fleet of P2XFloaters. 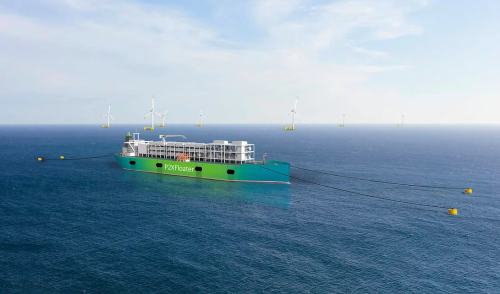 H2Carrier developed the P2XFloater concept in a close co-operation with leading maritime and process engineering companies in Norway, thus building on decades of experience and competence from the oil & gas sector, the marine industry and the offshore wind installation industry.

The P2XFloater concept is based around making a life extension of an existing Very Large Gas Carrier (VLGC) and expanding upon its design by extending its hull to maximize production capacity.

Green hydrogen is produced by pumping seawater onboard, purifying the water and feeding it to electrolyzers. The green hydrogen is combined with nitrogen extracted from the air and synthesized in an ammonia generator to produce green ammonia. All steps are powered by renewable wind, solar or hydro energy through a high capacity power cable from a renewable power source next to the P2XFloater.

A mechanical arm and hose allows the P2XFloater to transfer liquid ammonia to another vessel without a pier or any other infrastructure adjacent to it. This allows cargo transfer to transpire seamlessly, minimizing time, fuel consumption and emissions. This has the potential to reach bunkering hubs world wide in a fast-track solution, making ammonia affordable and accessible to anyone, the company says.

The P2XFloater has now reached another important milestone with the award of an Approval in Principle (AiP) from DNV which affirms the technical feasibility of the design.

The AiP covers all aspects of the integrated vessel concept including structural integrity, mooring, ammonia production, ammonia storage and cargo handling. The AiP assessment has looked at the technical challenges associated with offshore ammonia production and has concluded that there are no insurmountable difficulties to preclude future classification of the design.

H2Carrier AS was established in 2019 based in Oslo, Norway by a core team with skills and experience from floating production of oil & gas, offshore wind installation and the renewables industry.

The P2XFloater design enables off-grid production and thus enables remote renewable energy resources to be realized through production and storing of hydrogen and green ammonia with further transportation to the consumer markets.

The renewable source can be either hydro power, sun or wind- or a combination of these. Low-cost electricity is the single most important factor for the production of all zero carbon energies and globally, there are significant unused and non-commercial renewable resources which can be developed by the P2XFloater. A floating structure also has several other advantages compared to a land-based production facility for green ammonia with i.e. a terrain intervention which is insignificant in comparison.

H2Carrier is currently involved in energy generation projects in Scotland and Northern Norway. The demand for green ammonia internationally is rapidly increasing due to the industrial decarbonization. The maritime sector will provide further growth to this market as deep sea vessels in particular, will convert zero carbon fuels.

As we have noted here previously desalination is not a major cost contributor to hydrogen electrolysis:

This sort of floating production circumvents the need for costly cables or pipelines, and enables wind far further away from the coast and in deeper waters, so countering some of the objections about producing hydrogen instead of attempting somehow to always use the electrical output at 100% onshore.

I'd fancy using these platforms to produce methanol too, using the stored CO2 on methanol vessels, which can then refuel on the spot, but perhaps the extra stopover would make that less economic than using specialised ships to transport the methanol and CO2 to the platforms.

Of course this would also work with floating off shore solar for areas with strong solar resources.

Dave, seawater contains 125 times the amount of CO2 dissolved as air, 150 times if you include all the forms of c carbonates all of which can via electrolysis and the resulting PH shift be recovered 75%+ of the theoretical total has already be co produced with H2 electrolysis of seawater in a bimembrane stack. Essentially the CO2 is free once you drive the voltage potential to the H2 generation point the acid side of the cell has a PH below 6 and every bit of the CO2 can be vacuum outgassed at that point. The US Navy is using this very principle to make Jet fuel from seawater using the CO2 from the same electrolysis cell. The ratio is actually CO2 heavy at one to one so you have to over drive the H2 side of the cell which doesn't effect the CO2 production it's maxed out already to get the required 3 mol H2 to one mol CO2 for FT synthesis which is also the same ratio needed for MeOH production too. Since the world ocean is in equilibrium via the carbonate/bicarbonate cycle with the atmosphere any CO2 withdrawn from seawater will be rapidly replaced with CO2 from the air you couldn't deplete the oceans until the atmospheric ppm drops as well.

Great stuff - way above my pay grade!
I rely on picking other's brains though!

The really good news underneath all the crap that is happening, is that in Europe at least it is already cheaper to produce electricity/hydrogen etc from renewables with the current price of fossil fuels.

The only question in the big company's minds will be whether high prices of fossil fuels will be sustained.

My own view is that a hybrid between 'excess profits' taxes on the major energy companies and subsidy for renewables could unlease really huge investments - so to avoid a really large tax bill, the companies would have to commit to enormous investment in renewables, rapidly.

Of course that would give rise to all sorts of evasive measures and inefficiencies, but present arrangements are not free from either.

The unpopular but quickest way to hasten the move is to tax the fuels based on their carbon content per unit consumed at a rate that is equal too or higher than the cost to capture and sequester an equal amount of carbon dioxide from the atmosphere or oceans that part doesn't matter as they are connected fundamentally. Direct Air Capture technology is coming on line and is expected to be in the $200 to $100 per tonne of CO2 captured the cost to sequester is quite low compared to those numbers in the single digits for injection into old oil and gas wells or brine wells. For which there are hundreds of millions around the world.

Taxing petrol at $200 per tonne to force it to be carbon neutral would add 46 cents per liter on costs for the USA it's $1.75 per US gallon on top of the fuels retail price with existing taxes. This would put a huge incentive to move to zero carbon or at least carbon neutral fuels.

Since those fuels would not have the carbon tax on them such as synthetic natural gas made via captured CO2 and solar/win/nuclear hydrogen. Same for MeOH made with the same source ingredients. Once you have MeOH you can go via zeolite catalysts to Petrol+LPG , or olfines(propene,butene) the two base ingredients in most plastics,lubrication oils, and via a oligomerization step you can stack dimers and trimers of those two ~ene molecules into any number of C6 to C25+ carbon chains that's Naptha,kerosene,gasoil,heavy gasoil,and lubricants all carbon neutral from the base MeOH molecule.

Biofuels also would have a much smaller carbon tax as they have a nearly carbon neutral footprint when done right such as cellulose ethanol or algae biofuels. The point is raise the price floor permanently for fossil carbon and take every dollar of that tax and incentive carbon neutral fuels to replace them the industry will get the point post haste.

Check these guys out they are targeting $35 euro a tonne for CO2 capture from OTEC flows. At that price you could buy that CO2 add in wind/solar/nuclear off peak and curtailment power to synthesis MeOH at or below what fossil petrol is as selling for already in the EU. On a equal Gj basis of course not by volume.