California faces worsening grid challenges on Monday and Tuesday; CAISO calls for even greater reductions in electricity use

The California Independent System Operator (CAISO) is stepping up its call for consumers to lower electricity use in the afternoons and evenings to avoid outages over the next few days.

Starting tomorrow, this multi-day event is going to get much more intense. We are facing a load forecast of 48,817 megawatts and energy deficits between 2,000 and 4,000 megawatts for Monday, resulting in the highest likelihood of rotating outages we have seen so far this summer.

Because of the increasingly extreme conditons, we will need significant additional consumer demand reductions during the hours of 4 p.m. to 10 p.m. on Monday and access to all the emergency tools that the state and utilities have established for an extreme event like this one.

The ISO issued a statewide Flex Alert, its sixth straight day calling for consumers to cut their electricity use, on Monday from 4 p.m. to 10 p.m., when they are urged to set thermostats to 78 degrees or higher, avoid using major appliances, turn off all unnecessary lights and avoid charging electric vehicles. Flex Alerts are usually from 4 p.m. to 9 p.m.; the extra hour of reduced energy use is needed because of projected market deficiencies through 10 p.m.

Additional calls for reducing energy consumption are expected at least through Friday. The heat wave is historic for both its temperatures and its duration. Heat advisories and excessive heat warnings are in place across the West, with daytime high temperatures forecast to be 10-20 degrees above normal.

Electricity customers’ actions to cut their demand have already resulted in an estimated 600 to 700-megawatt savings in recent days and are expected to be even more important and impactful through the next several days.

Monday and Tuesday are still projected to be the most challenging days yet, with the highest temperatures forecast on Tuesday and projected electricity demand of 50,099 megawatts (MW). 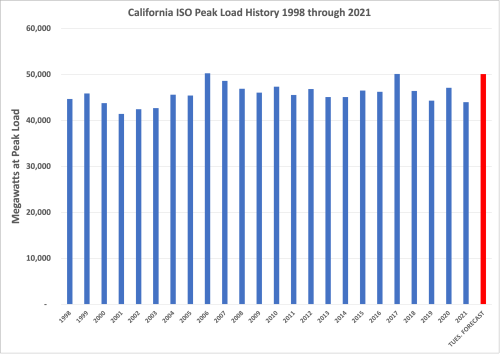 Grid operators are closely monitoring wildfires for potential threats to generators and transmission wires, and fire officials have warned that more fires could break out in the coming days, due to the prolonged high heat and dry conditions.

Several generators are already out of service, making supplies tighter. Consumer and commercial demand response, including Flex Alerts, has been helping to extend tight resources at critical hours so far this week.

The Governor had proclaimed a State of Emergency to increase energy production and reduce demand temporarily. The emergency proclamation allows power plants to generate additional electricity, permits use of backup generators to reduce the amount of energy they need to draw from the grid during the periods of peak energy demand during this heat wave, and allows ships in California ports to reduce their consumption of electricity from the grid.

The Friday order allows ocean-going vessels that are berthed at California ports between 3-7 September to not be required to use shore power until after 10 September.

It's time the electric grids catch up with modern science; There are plenty of solutions to supplying electricity to the grid during periods of high demand using Wind, Solar, and Geothermal Generation, Battery and Water Storage, and the concept of Microgrids. The oil interest must stop fighting against the new forms of energy generation and start investing in these new technologies to help solve problems rather continue to slow down progress. I suggest they invest in the geothermal sector as it fits right into their abundance of skill sets needed for mining refining and transportation. Hot water and steam from underground could be the next wave of profits in the energy sectors.

They're feeling the lack of San Onofre pretty badly right now.  Diablo Canyon just had the importance of its reprieve underscored.

Lad, if you look at the geothermal resources in California, they're depleting pretty rapidly.  The steam production at The Geysers is now down to something like half of its peak.  Geothermal energy averages milliwatts per square meter, meaning once a body of rock is cooled it takes eons to re-heat to equilibrium.  You're just not going to get much out of it.

Independence from grid problems is readily available to anyone who owns their house by installation of solar and battery stationary storage. That is not everyone, but if enough people who own their properties install systems, it will ease strains on the grid considerably, helping those who rely on communal housing.

This is a solvable problem. These strains are signals, hope homeowners are paying attention.