In an open-access paper in the journal Fuel, they report that RCTJI with scavenged TJI can effectively extend EGR tolerance and improve spark ignition engine performance. They note that the concept of RCTJI can be further used in an ammonia-fueled engine to solve the issues of difficult ignition and slow flame propagation. 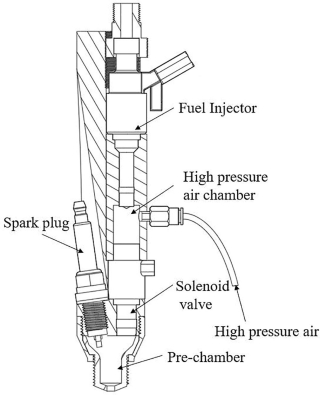 Improving the thermal efficiency of internal combustion engines and reducing the carbon dioxide (CO2) emissions have become the subject of research in the face of increasingly stringent emissions and fuel consumption regulations, drawing increasing attention due to the ability of lean and dilute combustion to reduce fuel consumption and emissions. As an effective technique, the exhaust gas recirculation (EGR) method has been extensively studied and widely used in the field of internal combustion engines to lower the propensity of knock and NOx emission.

EGR is also can be considered as lean combustion with main CO2 dilution compared to the excess air dilution. EGR dilution can make the use of a three-way catalytic converter (TWC) possible. However, EGR can reduce the combustion temperature and flame propagation velocity, which deteriorates combustion stability and engine power. In the light of this issue, turbulent jet ignition is introduced to ensure reliable ignition and a high burning rate in spark-ignition engines by using a pre-chamber, which is receiving increasing attention in its application in SI engines.

… the objective of this work is to conduct experimental studies of the gasoline engine with EGR dilution combustion based on reactivity controlled turbulent jet ignition (RCTJI). As our knowledge, this study demonstrates the following new contributions: (1) the reactivity controlled turbulent jet ignition (RCTJI) is proposed based on a newly designed air-assisted pre-chamber configuration with a scavenging function (scavenged TJI) for the first time, to the best of the author’s knowledge. (2) The EGR tolerance is tested based on the RCTJI mode. (3) The different ignition modes involving spark ignition (SI), passive TJI, active TJI, and scavenged TJI are compared in terms of the combustion phases, fuel consumption, and pressure oscillation at different EGRs to reveal the in-depth mechanism. The present work will provide a very effective method to control the TJI intensity of pre-chamber. 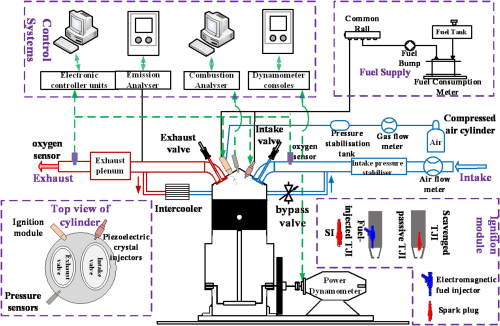 The researchers used a four-stroke 0.5L single-cylinder engine, an electric dynamometer, a self-designed jet ignition system, and a dual direct injection fuel supply system for the main combustion chamber and pre-chamber, and a pressure test system. The experiment was carried out at the engine speed of 1500 rpm with a compression ratio of 11. The engine was naturally aspirated with an intake pressure of 1 bar and an intake temperature of 300 K. Zhou et al.

The results showed that three TJI modes can obviously shorten the combustion duration due to the fast jet flame.

Compared to the SI mode, the spark timing of TJI is not sensitive to the change in EGR rate. In particular, scavenged TJI could effectively promote the chemical reactivity in the pre-chamber, and subsequently improves the intensity of the turbulent jet flame and shortens the ignition delay and combustion duration. As a result, using scavenged TJI can effectively reduce cycle variation and achieve the lowest indicated specific fuel consumption (ISFC) at high EGR rates.

The main findings of the study were:

Im interrested to buy an ammonia car in 2030 as ammonia should be cheap at that time.

NH3 is a health hazard and attacks and burns the eyes, nose and lungs. At this current level of development, it is not useable as a fuel. Some think it's a 'red herring' put forth by Big Oil.

'Some people' think all sorts of things.
That does not mean that they are either correct or sensible.

Anything with enough energy to move transport has inherent dangers, which need proper engineering to safely deal with.

Have you seen the pictures of flaming batteries?

Do you think that a reason to rule them out?

With solid state batteries just around the corner getting ready to emerge on the market, flaming batteries belong to the rare exceptions of the past. I don't see any parallels to incommensurable fossil products.