Swiss marine power company WinGD and Korean engine builder HSD Engine have initiated a Joint Development Project (JDP) to advance the development of WinGD’s methanol-fueled big-bore engines. The aim is to deliver an engine capable of running on carbon-neutral green methanol by 2024, providing shipowners with a power solution enabling them to meet IMO’s 2050 target—and to reach net-zero emissions—with their next generation of vessels.

With new fuels, new materials are needed and manufacturers’ involvement in design is critical to ensure that engines can be produced at reasonable costs and in a reasonable timeframe. HSD is well-known as a high-class engine builder that will be able to support WinGD in delivering the methanol-fueled two-stroke engines that our customers will be seeking for their vessels in the near future.

The JDP will focus on some of the largest engines in the WinGD portfolio, the X92 and X82. These engines will be suitable for the larger and ultra-large container ships in which WinGD sees rapidly growing interest in green methanol. Demand is also growing, albeit at a slower pace, in the bulk carrier and tanker segments. 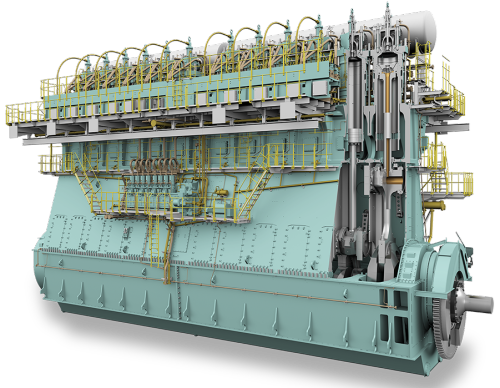 The WinGD X92 platform is one of the initial targets for methanol fueling.

The project is the latest partnership with engine builders aimed at accelerating the development of WinGD engines capable of running on new fuels. Schneiter said that multiple collaborations are essential to meet expectations of all shipbuilding markets and to develop jointly engine builders’ capabilities in testing and designing for new fuels.

WinGD originated from the diesel engine business of Sulzer Corporation in Winterthur, established in 1893 when the Sulzer Brothers signed an agreement with Rudolf Diesel for his new engine technology. Sulzer started diesel engine manufacturing in 1903 in Winterthur. In 1986 the last diesel engine left the Winterthur facility. 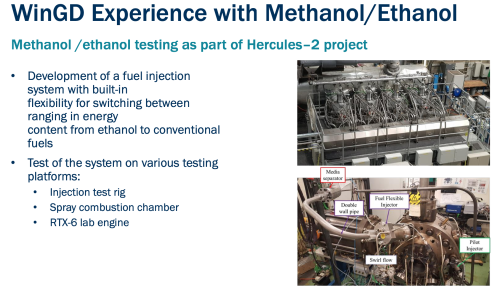 WinGD was a major participant in the HERCULES-2 project, the follow-on from the long-term R&D project HERCULES to develop new technologies for marine engines. HERCULES was the outcome of a joint vision by the two major European engine manufacturer groups MAN & Wärtsilä.

'Carbon-neutral green methanol' is produced by combining CO2 and H2; CO2 from the air or from biogen and non-biogen waste gasses. It is called green if the H2 is produced by an electrolyzer; otherwise, it's grey H2.
What's in words? confusion; so that one loses the fact that anytime you burn hydrocarbons in the atmosphere and don't capture the exhaust, you produce GHG. And, it seems to me if you are busy converting energy from one form to another and each conversion is a lose of efficiency, you should use the initial form if possible.
I still not sure if this is not a complete load of you-know-what:
https://assets.siemens-energy.com/siemens/assets/api/uuid:a9a0f730-ed3e-4e3e-8593-d3de4d3df9bf/siemens-energy-emethanol-2020.pdf

I am not aware of any proposals not to use energy in as near to its original form as possible, so avoiding conversion losses.

The problem is that it often is not.

That is why engineers figure out ways around that.

I am not sure what you imagine the alternatives are to attempting to use resources like methanol in as circular and sustainable fashion as possible are.

How do you think container ships are going to cross oceans?

You surely do not imagine that batteries are remotely able to do that?

And conversion of resources such as solar to electricity is itself a, very, lossy process, involving changing energy from one form to another, so perhaps you are against solar photovoltaics if that is your sole criteria?

How do you think container ships are going to cross oceans?

Nuclear energy, or nothing.  If people try to go with non-fossil chemical fuels, production will move to the destination countries b/c cost.

You and me both would like to simply go to nuclear for this sort of heavy duty application.

Unfortunately, neither liquid fuels from electrolysis nor nuclear are favored by those who imagine that batteries plus fairy dust will solve everything.

Davemart, I understand only TOO well that there are many millions of "educated" people who cannot do math.  This is why math should be a gatekeeper subject for even undergraduate degrees... such gates to be repeatedly presented as necessary to weed out the incompetent, especially in emotionally troublesome areas.  Numbers don't lie, people do..