The production process—using only solar heat—was first demonstrated in 2019 in a mini-refinery on the roof of ETH Zurich. Since then, Synhelion has been focusing on scaling up the technology and making it industrially viable.

Synhelion has developed a solar thermal process for the production of syngas, which is then used in standard industrial processes to synthesize liquid fuels, such as kerosene, gasoline, or diesel, that are compatible with conventional jet engines and internal combustion engines. 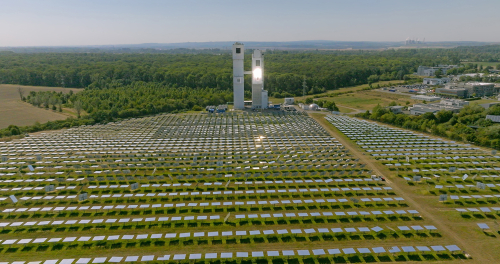 Synhelion produces solar syngas on an industrial scale for the first time in the world on the DLR multifocus solar tower.

Solar radiation is concentrated by a mirror field onto a solar receiver developed by Synhelion in the multifocus solar tower. The precise mirror field control technology was developed and installed by Synhelion Germany. Specifically, a 250-kW receiver from Synhelion was coupled with a 6-meter-high, 12-ton reforming reactor from Wood at the plant; the reactor is powered by solar process heat. The system as demonstrated has a production capacity of 100 standard cubic meters of syngas per hour.

DAWN will be the first industrial-scale plant to use all the innovations developed by Synhelion. The demonstration plant will also serve as a model for future commercial plants.

The DAWN plant consists of a 20-meter-high solar tower and a heliostat field with a mirror surface of 1,500 m2. The solar radiation is converted into high-temperature process heat of more than 1,000°C, then drives the thermochemical reaction to produce solar fuels. The reactor is fed with methane (CH4) and carbon dioxide (CO2) of biowaste origin from a local paper mill, as well as water (H2O).

The precise control technology of the heliostat field was developed by Synhelion and guarantees optimal use of land resources and building materials. The solar tower houses three innovations developed by Synhelion: a solar receiver, a thermochemical reactor, and a thermal energy storage system that enables cost-efficient operation around the clock.

Synhelion’s industrial demonstration plant will produce several thousand liters of fuel per year. The fuels produced (solar kerosene and gasoline) will be used to demonstrate various possible use cases. SWISS will be the first airline to fly on Synhelion’s solar kerosene. Future planned plants will exceed the size of DAWN and offer a significantly higher production capacity.

The demonstration plant will be built at Brainergy Park in Jülich, Germany, which offers Synhelion ideal logistic conditions. Jülich is not only the headquarters of Synhelion Germany, but also the location of Synhelion’s project partners, the German Aerospace Center (DLR) and the Solar Institute Jülich of Aachen University of Applied Sciences. The German Federal Ministry for Economic Affairs and Climate Action (BMWK) is supporting the construction and operation of DAWN with €3.92 million. In the long term, the DAWN facility will be mainly used for research and development purposes.