Researchers at the University of Melbourne (Australia) have demonstrated a method of direct hydrogen production from air—in situ capture of freshwater from the atmosphere using hygroscopic electrolyte and subsequent electrolysis powered by solar or wind with a current density up to 574 mA cm−2. An open-access paper on what they call “direct air electrolysis, DAE” is published in Nature Communications.

The team operated a prototype device for 12 consecutive days with a Faradaic efficiency of around 95%. 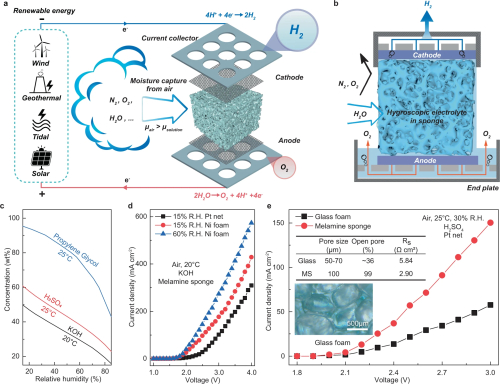 (a) A schematic diagram of the DAE module with a water harvesting unit made of porous medium soaked with the hygroscopic ionic solution. (b) A schematic diagram of the cross-section of the DAE module, showing the electrodes are isolated from the air feed, and the absorbed water are transported to the electrode by capillaries of the sponge. (c) Equilibrium water uptakes of hygroscopic solutions at different air R.H. (d) J–V curves for DAE modules using Pt or Ni electrodes sandwiched with KOH electrolyte (in equilibrium with 15% and 60% R.H. at 20 °C) soaked in a melamine sponge. (e) Effect of sponge materials on J-V performance of DAE modules using H2SO4 electrolyte in equilibrium with 30% R.H. at 25 °C. The inset shows the optical micro image for the glass foam. Guo et al.

The deployment of water electrolyzer is geographically constrained by the availability of freshwater, which, however, can be a scarce commodity. More than one-third of the earth’s land surface is arid or semi-arid, supporting 20% of the world’s population, where freshwater is extremely difficult to access for daily life, let alone electrolysis. In the meanwhile, water scarcity has been exacerbated by pollution, industrial consumption, and global warming. Desalination may be used to facilitate water electrolysis in coastal areas, however, substantially increasing the cost and complexity of hydrogen production. On the other hand, areas rich in renewable energies are commonly short in water supply.

… In this work, we corroborate that moisture in the air can directly be used for hydrogen production via electrolysis, owing to its universal availability and natural inexhaustibility—there are 12.9 trillion tons of water in air at any moment which is in a dynamic equilibrium with the aqua-sphere. … Considering deliquescent materials such as potassium hydroxide, sulfuric acid, propylene glycol can absorb water vapor from a bone-dry air, here, we demonstrate a method to produce high purity hydrogen by electrolyzing in situ hygroscopic electrolyte exposed to air.

The electrolyzer operates steadily under a wide range of R.H., as low as 4%, while producing high purity hydrogen with a Faradaic efficiency around 95% for more than 12 consecutive days, without any input of liquid water. A solar-driven prototype with five parallel electrolyzers has been devised to work in the open air, achieving an average hydrogen generation rate of 745 L H2 day−1 m−2 cathode; and a wind-driven prototype has also been demonstrated for H2 production from the air. This work opens up a sustainable pathway to produce green hydrogen without consuming liquid water.

Contrast this with the massive water consumption of fossil fuel and current nuclear cooling needs, although some varieties of nuclear like a molten salt design from China can run without using it, which is more than can be said for fossil fuels.

Of course, where it is in the right place and right time electricity use directly from wind and sun is preferable, the problem is that it so often is not, and so the need for storage cannot be avoided.

And the supposed loss in efficiency of the hydrogen production chain is greatly mitigated when use is made of the thermal energy as well as the electrical output of fuel cells - why thrown it away when it can be used to provide hot water?

So home fuel cells in Japan hit 90% plus for electrical plus thermal efficiency.

I have misplaced my reference, but a home system would take 10sq meters of moisture absorption space, which can be stacked as in the tower these guys used.

In combination with a rooftop solar array, you have much more like a workable stand alone energy system, with the weak point being hydrogen storage, with current options either in tanks or hydrides being at an earlier stage of development.

It can and has been done, but is currently expensive.