thyssenkrupp will build a €2B hydrogen-powered direct reduction plant at its Duisberg site. Capacity will be 2.5 million metric tons.

The release of this enormous investment comes in the midst of the company’s transformation, in what is also for all concerned an extremely challenging environment. We are thus underlining our claim to make a significant and, above all, rapid contribution to the green transformation—also where steel is concerned. This is a further step for our team at Steel Europe, for our partners and for the Ruhr region. In this region, we have everything that is needed for a successful green transformation. That is why the Ruhr region is playing a leading role in the energy turnaround. We are firmly convinced of this, and this is also borne out by this investment, which heralds a new era for steel production in the Ruhr region.

As part of its tkH2Steel transformation project, coal-based blast furnaces will be replaced by hydrogen-powered direct reduction plants. In contrast to a conventional blast furnace, DR plants do not produce hot metal, but solid sponge iron (Direct Reduced Iron, DRI). The DRI must then be melted down into a hot metal-like product so that it can be further processed into high-quality steel.

Together with plant manufacturers, thyssenkrupp Steel is developing a power-operated melting unit, which is combined with the DR plant. Direct reduction plants with melting units—just like a blast furnace—continuously produce a liquid product comparable to conventionally produced pig iron. 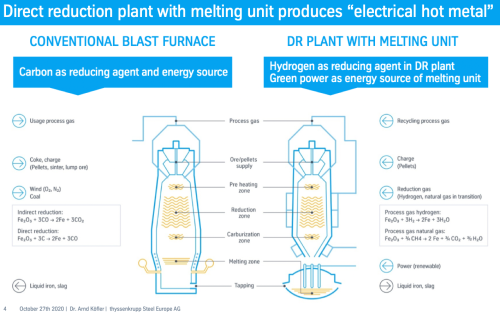 As a result, the new DR and melter plants can be seamlessly integrated into the existing metallurgical plant. Existing and proven processes in the Duisburg-based BOF (basic oxygen furnace) meltshops can be maintained. The liquid product is processed into the proven steel grades there. Thus, the Duisburg steelworks is continuing to boil steel as in the past—but with hydrogen and green power instead of coal. The feasibility, scalability and innovativeness of this concept were confirmed by scientists from RWTH Aachen University in a study commissioned by thyssenkrupp Steel at the beginning of 2021.

The first direct reduction plant with downstream melters will supply our customers with over two million metric tons of low-CO2 premium steel per year in the foreseeable future, significantly more than previously planned. We are thus reaffirming our goal of playing a leading role in the competition for the green steel markets of the future and supporting our customers in achieving their decarbonization targets. In addition, we are fulfilling our social responsibility and will already be reducing the CO2 emissions of our production by just under 20 percent in the first step. That is already five percent of the Ruhr region’s greenhouse gas emissions. Our tkH2Steel transformation project is the key to this.

—Bernhard Osburg, Chairman of the Executive Board of thyssenkrupp Steel Europe AG

With its capacity of 2.5 million metric tons of direct reduced iron, the first plant will be larger than initially planned. In this way, thyssenkrupp is accelerating the start of low-CO2 steel production. At the same time, the increasing demand for climate-friendly steel is being taken into account and the ramp-up of the hydrogen economy is being accelerated.

In the new plant concept, the entire premium product portfolio can thus be produced with low CO2 emissions without compromising on quality.

With the increase in plant capacity, thyssenkrupp Steel has also significantly raised its climate targets.

By as soon as 2030, we are planning for around five million metric tons of low-CO2 steel, which will deliver CO2 savings of well over 30 percent. The now imminent construction of one of the largest hydrogen-powered direct reduction plants planned to date will also generate innovation and employment in the Ruhr region and beyond. The intelligent combination with newly developed melting units can serve as a model for many other decarbonization projects in the steel industry worldwide. In order to continue our transformation without delay, we are planning to award the contract in the fall and we are already making appropriate preparations.

Technically astute commentators here ( sd perhaps?) have noted that it is possible to make low carbon steel without using hydrogen.

So why aren't we doing that?

The answer appears to be that it is down to technological maturity, with hydrogen ready to go right now, and of course decarbonisation is urgent.

Here is a discussion:

Eventually it is likely that the use of hydrogen in steelmaking will be phased out, but it is a decent half way house, and there are plenty of other uses for the hydrogen after 30 years or whatever when the just being built hydrogen low steel plants come to be replaced.

Boston Metals (see https://www.bostonmetal.com/ ) has a very promising direct electrolysis of molten iron ore. Electricity in and pure molten iron and oxygen out and, of course, slag. They are in pilot production now and hope to have commercial operations going by 2026. It uses less energy than hydrogen reduced steel and the molten iron only needs to have the requisite alloying agents added to be ready to roll so there is no need to refine or reheat to make steel. The are also projecting lower capital costs and can directly use lower grades of iron ore. So it looks like a win, win, win. But time wise, it is behind hydrogen reduction as Davemart alluded to. Hydrogen reduction may also make use of more of the existing infrastructure.

Engineering with Rosie had an interesting YouTube video tour of Boston Metal's facility. This is where they noted that they can use lower grades of iron ore than the direct hydrogen reduction.

Just so.
I thought the point that using hydrogen means that you have to go for rare high grade ores especially telling - they just ain't about.

In my dotage I had forgotten that point until you reminded me.

Dunno if switching to hydrogen gets us very far.

But speeding up technological change is tough to do, or you end up with massively expensive stuff which does not work.

Any really substantial decarbonisation of steel making awaits it though.

I dug around a bit more, and apart from not using hydrogen, there are three more approaches that are being used to deal with the high grade ore issue for using hydrogen:

So the mining companies can put more emphasis on digging up high grade ores, which they did not need to do for blast furnaces.

They are looking to beneficiate the ores.

And finally they are trying to improve DRI so that it does not need high grade ores.

None of that is easy, and it is a substantial problem, but it sets my mind at rest that this is not some sort of greenwashing, which is not unheard of, although not so much from some of the very reputable companies leading the charge to decarbonise steelmaking by using hydrogen.

So my last 'that substantial decarbonisation of steel making awaits technologies not using hydrogen' was too hasty.