Benchmark: world needs more than 300 new mines by 2035 to keep up with Li-ion battery demand; need for recycling

Demand for lithium-ion batteries is set to grow six-fold by 2032, according to Benchmark. Accordingly, the world needs more than 300 new mines to be built by 2035 if raw material supply is to keep up with this demand, according to a new analysis by Benchmark.

However, recycling could help reduce the number of mines needed. Without recycling, for example, we will need 62 cobalt mining projects by 2035, according to Benchmark; with recycling, this falls to 38. 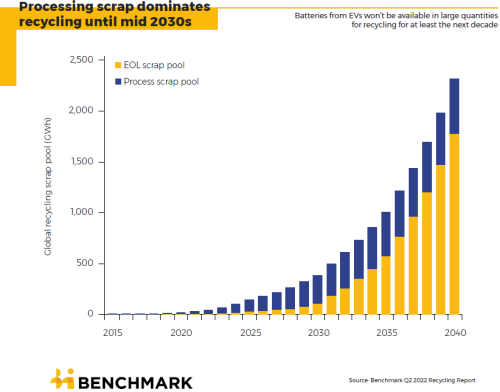 Benchmark forecasts this scrap will account for 78% of the pool of recyclable materials in 2025. This year Benchmark expects more than 30 GWh of process scrap to be available for recycling, growing ten-fold across the next decade.

In the long term, the loss rates will steady out but there will always be losses, said Sarah Colbourn, an analyst at Benchmark. Although the rate of increase of the process scrap pool will slow down beyond 2030 there will still be a significant volume of scrap, she said.

The available waste pool will see a shift around the mid-2030s when end-of-life batteries will overtake process scrap as the primary source of recyclable material, according to Benchmark.

Collecting process scrap is far simpler than collecting end-of-life batteries, however. Rather than being concentrated in predictable gigafactories, these batteries will be geographically dispersed and require an extensive collection infrastructure.

China currently dominates the recycling scene. The top eight recyclers operating this year are all based in the country. As China hosts the majority of battery cell producers, they also generate the largest quantity of process scrap.

As with all articles and "studies" of this kind the authors conspicuously refuse/fail to make any reference to imminent or emergent alternatives to lithium-based batteries - especially sodium ion and solid state sodium, sodium sulphur(sulfur) and even aluminium sulphur. And equally predictably and true-to-form - the article and "researchers" talk about the increasing demand for cobalt without making a single reference to the inexorable rise of Lithium Iron Phosphate batteries(BYD,CATL etc) which by definition contain no cobalt !
So this is patently just another typical example of agenda-driven, selectively silent "research".
Paul G(Editor: EVUK...since 1999)

You have read an extract, not the report, so claims about what they don't mention or have failed to take into account are wide of the mark.

I have not read this particular report either, but I would be astonished if they have not taken into accounts sodium batteries etc, or lithium phosphate.

For high energy density batteries, cobalt is still extensively used though, and demand figures will take that into account.

Of course, estimates about how much of each will vary, so the report should not be taken as the last word.

But you simply don't know what they have or have not mentioned and taken into account in the full report, as you have not read it.

India is skipping lithium batteries due to resource concerns:

' India needs to move away lithium-ion battery technology for electric vehicles (EV) at the earliest, as the country has no control over the raw materials needed to build such batteries, Union minister V K Singh said on Wednesday. The country could also graduate to hydrogen fuel cells in its journey of green mobility, and players in the sector need to work simultaneously on these technologies from now onwards, the minister of state for road transport and highways, Singh, said at the inauguration of EV India 2022, an electric vehicle motor show.

He said there is a lot of work happening in the battery segment in India on how to reduce dependency on lithium-ion batteries. Different research is going on regarding the usage of sodium-ion and zinc-ion "because we would like to get away from lithium-ion", he added. The minister said India neither produces lithium nor has control over it; the country has to import it. "There is a problem where lithium is concerned, and the earlier we get out of it, the better it is," Singh asserted. At present, the majority of electric vehicles sold in India use lithium-ion battery technology, although some electric rickshaws are still powered by lead-acid batteries. The minister said India is also working heavily on hydrogen cell technology, which has a lot of potential. "We are at par with what is happening in Japan (in hydrogen fuel cell)," he said, adding India's biggest advantage is that the cost is the lowest as far as green hydrogen is concerned because of low solar energy cost. "In future, probably we are going to graduate from electric to hydrogen," Singh said.'

Not convinced that BEV sales (G7 country-type models - not 3-wheelers, etc) will continue to accelerate as with 2017 - 2020, despite proposed and early-days non-ICE regulations as with some EU countries and California. Most likely, there will be a significant plateauing in the very low double-digit percentage of all light-vehicle sales into the next decade. Further, mining automation and near-elimination of traditional coal/ copper-type 'open pit mining techniques' for the required basic battery/control system mine products will mean reduced dependence on China/ Africa/ S.America for virgin materials and niche need for recycling/ re-use (due to reduced mine NIMBYism in G7). The coming of battery propulsion will not mean the end or even reduction of large-car/SUV consumerism. Provided that the price of PHEVs (with battery-only range of at least 100 - 200 miles) for larger vehicles is not more than 25% above the comparable model BEV or ICE, I predict that this will be the dominating propulsion type into and beyond the 2030s. Gas stations will not go away as hybrid SUVs, larger recreation vehicles (including the burgeoning industry of camper-types), and pick-ups continue to frequent gas stations at a stabilized $3-4US/gallon (2020) average price, in addition to their at-home and business recharge - in hopes that the fragile local and regional electric grid infrastructure can handle it. Also, China is likely to follow US consumerism model. There are not sufficient economical reasons to move to a full BEV world, only sentimental and moralistic reasons. Though the EU may legislate such, this will stall car sales there, and the US is unlikely to outlaw gas car sales in more than low-double-digit populations overall for the foreseeable decades. So, such need for huge areas of mining, recycling, and re-use is unlikely in the timeframe described.