Solaris unveiled its Urbino 18 hydrogen bus, the company’s second hydrogen bus in its zero-emission offering. Solaris’s new vehicle doesn’t feature a conventional engine compartment as it has been equipped with a modular drive system. The space thus saved allowed the bus maker to increase the vehicle’s passenger capacity. 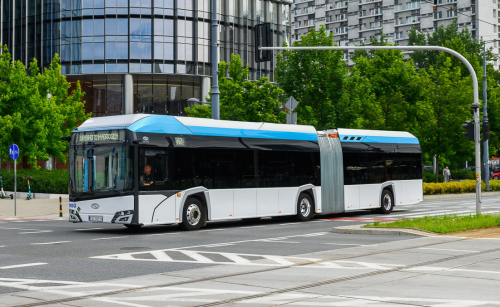 Also, by eliminating the engine compartment, more space on the roof has been created, where composite light hydrogen tanks with a total capacity of 51.2 kg have been mounted. The use of a modular drive also facilitates servicing as its main components are now accessible from floor level.

The electricity from the hydrogen fuel cell in this articulated Solaris bus is transferred directly to the driveline. Solaris batteries with a capacity of around 60 kWh, mounted in the vehicle serve as an auxiliary power source, used, for example, during acceleration as well as a storage for recovered energy. Full refueling of the vehicle takes around 20 minutes.

The first deliveries of the 18-meter articulated vehicle will be possible as early as the second quarter of 2023. Customers will be offered the possibility of customizing the bus to cater for their individual preferences. The bus will be available with four door arrangements: 2-2-2-0, 1-2-2-0, 1-2-2-2 and 2-2-2-2.

As standard, the new model will feature an air-conditioning system for the passenger compartment with a heat pump, which uses heat drawn in from outside to create the right vehicle temperature. The air conditioning in the driver’s cabin is powered by the passenger compartment unit. As regards additional features, clients may choose from a variety of solutions, for example, they may opt for ADAS systems such as MirrorEye or MobilEye Shield+.

The 12-meter version of the Solaris Urbino hydrogen bus was launched in 2019. Since then, nearly 100 hydrogen buses have already been delivered to customers in Italy, Germany, the Netherlands, Sweden and Poland. New deliveries to clients in Spain, France, the Czech Republic and Slovakia, amongst other countries, will start soon.

I hope they run them on green hydrogen, and not grey.

Currently 95% of the H2 is produced by reforming natural gas, brown hydrogen...dirty process!

I've yet to find a thorough analysis of the well-to-wheels energy usage(and cost) in fuel cell vehicles. Hydrogen is transported and stored mostly in liquified form I assume? How much energy is required to store/keep, let's say, 10,000 gallons or litres at the requisite minus 252.87 degrees C ?
Is it stored as liquid (so at -252 C) at hydrogen refuelling stations - not least to save space ? No FCV articles or press releases ever address these basic but crucial questions...I wonder why !
Paul G