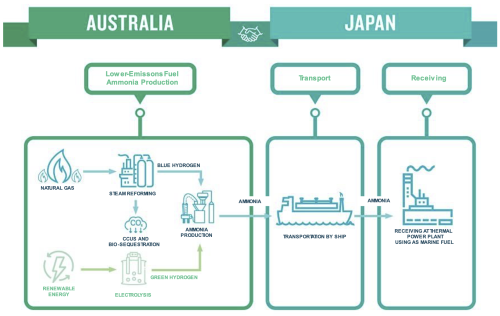 Ammonia does not emit carbon dioxide during combustion and is considered a promising next-generation lower-emission fuel for energy-intensive thermal power plants and marine engines. Given existing proven technologies for the production, storage, and transportation of ammonia, it is expected to have early take-up as a lower-emission fuel.

In addition, Japan’s Sixth Strategic Energy Plan, published on 22 October 2021, states that ammonia-fueled power generation is one of the most promising options for decarbonizing power sources toward achieving carbon neutrality by 2050 since it does not emit CO2 during combustion and can be utilized in many existing power generation facilities such as boilers and denitration facilities without modification.

Last year, Woodside, JOGMEC, Marubeni, Hokuriku Electric, and Kansai Electric conducted a feasibility study on the entire supply chain, including the production of lower-emissions ammonia in Australia from natural gas with CO2 abatement methods such as Carbon Capture and Storage (CCS), Carbon Capture and Utilization (CCU), and bio-sequestration; marine transportation to Japan; ammonia’s utilization as a fuel for power generation and marine use; and financing.

In last year’s study, the parties sought to address the feasibility of establishing a supply chain in relation to economics and CO2 emission reduction.

As part of Phase 2 of the Project, seven parties, including Tohoku Electric and Hokkaido Electric as new participants, will conduct a further detailed feasibility study to inform the viability of establishing a lower-emissions fuel ammonia supply chain based on the results of the feasibility study conducted the previous year.

All parties participating in this project will continue the research already conducted in order to establish a lower-emissions fuel ammonia supply chain between Australia and Japan through collaboration, in an effort to assist the decarbonization of Australia and Japan.

The project will focus on reducing greenhouse gas emissions associated with ammonia production and transport by up to 40% through developing advanced technologies that can be applied across the entire value chain from water use/purification through treatment/consumption to wastewater treatment and recycling/disposal. I would like to visit https://write-my-essay.online/write-my-term-paper/ website in order to find the best writer who will assist me in my term paper.