Mercedes-Benz plans to build a wind farm at its test track in Papenburg, northern Germany, with an output of more than 100 MW to cover up to more than 15% of the annual electricity demand of Mercedes-Benz Group AG in Germany. 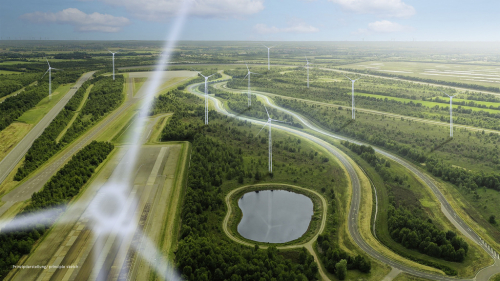 As part of its effort to erect a double-digit number of wind turbines by the middle of the decade, Mercedes-Benz is also planning a long-term power purchase agreement with a partner, equivalent to a triple-digit million euros amount.

The large-scale installation of photovoltaic systems on the test site is also under examination. The project plans and an ecological impact review will be carried out in close coordination with the local authorities and stakeholders.

The approximately 800-hectare site has been an integral part of the company's research and development activities since 1998. With this project, Mercedes-Benz is expanding its green electricity portfolio in the medium term and at the same time actively supporting the expansion of onshore wind energy in Germany.

The targeted expansion of renewable energies at our own locations is an integral part of our sustainability strategy. With the realization of the planned wind farm project in Papenburg, we are taking an important step in this direction. We make an active contribution to the energy transition and the expansion of onshore wind power in Germany. By installing photovoltaic systems on the roofs of our plants on a large scale, we are gradually reducing our external energy requirements.

—Jörg Burzer, Member of the Board of Management of Mercedes-Benz Group AG, Production and Supply Chain Management

Since this year, production at company plants has been CO2-neutral and Mercedes-Benz is pursuing the goal of covering more than 70% of the energy demand in production with renewable energies by 2030. The company is focusing on the expansion of solar and wind energy at its own locations and by concluding further corresponding power purchase agreements. By 2025, Mercedes-Benz will invest a triple-digit million euros amount in expanding the installation of photovoltaic systems.

The company’s goal is to at least halve CO2 emissions per passenger car over the entire life cycle by the end of this decade compared to 2020. The most important levers for this are the electrification of the vehicle fleet, charging with green electricity, the improvement of battery technology and the comprehensive use of recycled materials and renewable energies in production.

They better build 7 of them to cover 100% of their needs, and they'll need special ones that can generate electricity when the wind is not blowing and the sun not shining.