Electrofuels provider Infinium announced an agreement with Amazon to begin using Infinium Electrofuels in the retailer’s middle mile fleet as an ultra-low carbon alternative to traditional fossil fuels. The clean burning electrofuels will be produced for Amazon at one of the first electrofuels production facilities, located in Texas.

Infinium Electrofuels, which are produced from carbon dioxide and renewable power, can be dropped into Amazon trucks with no engine modifications as an immediate replacement to petroleum-based fuel. These electrofuels significantly reduce greenhouse gas (GHG) emissions over traditional fossil fuels, making them among the strongest ultra-low carbon alternatives to traditional fuel without requiring costly engine modifications. 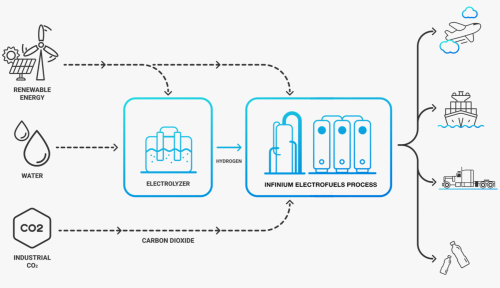 The Infinium Electrofuels production facility in Texas will use approximately 18,000 tons per year of CO2 that would have otherwise been released into the atmosphere, producing enough electrofuels to power vehicles in Amazon's middle mile fleet for approximately 5 million miles per year. The Infinium facility is due to begin production in 2023, and Amazon plans to begin using the electrofuels in the Southern California region initially.

While the new agreement is focused on providing Infinium Electrofuels for Amazon’s middle mile fleet, Electrofuels can also be used to power airplanes and used as an ultra-low carbon fuel alternative in the production of plastics and other industrial materials.