NTSB calls for alcohol detection systems in all new vehicles

An investigation into a California crash that killed nine—including seven children—has led the National Transportation Safety Board to call for alcohol detection systems to be included in all new vehicles, according to new recommendations released Tuesday. The crash, on New Year’s Day 2021 in Avenal, California, was caused by an impaired driver who was speeding, the NTSB found.

As a result of the investigation, the NTSB is recommendin​g measures leveraging new in-vehicle technologies that can limit or prohibit impaired drivers from operating their vehicles as well as technologies to prevent speeding. These include:

On Friday, 1 Jan 2021, a sport utility vehicle was traveling south on State Route 33 near Avenal, Calif. Meanwhile, a pickup truck—occupied by a driver and seven passengers, ranging in age from 6 to 15 years old—was traveling north on State Route 33. The SUV had traveled less than 3,000 feet on SR-33, during which it accelerated to a speed between 88 and 98 mph, when it ran off the shoulder to the right. The driver overcorrected to the left and the SUV crossed the centerline into the other lane, directly in front of the oncoming pickup truck. The SUV and pickup truck collided head-on and the truck immediately caught fire. The SUV driver and all eight pickup truck occupants died. 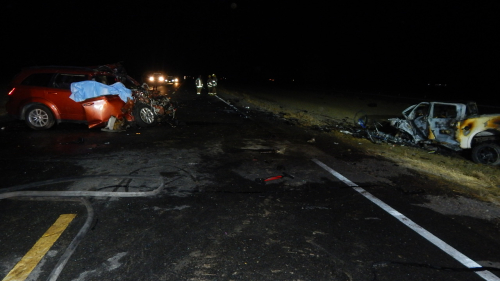 NTSB investigators found that the SUV driver had a high level of alcohol intoxication and was operating at an excessive speed. These factors contributed to a loss of vehicle control. The excessive speed of the SUV also prevented the oncoming pickup truck from having enough time to take evasive action. The NTSB determined that it is unlikely this crash was survivable due to the severity of the head-on collision, the significant vehicle intrusion and the rapid spread of the post-crash fire.

Speeding is also a problem that research suggests is worsening. In 2020, there were 11,258 fatalities in crashes in which at least one driver was speeding, according to NHTSA. Speeding increases both the chances of being involved in a crash and the severity of crash injuries.

The issues of impaired driving and excessive speeding are both on the NTSB’s Most Wanted List of Transportation Safety Improvements. To prevent alcohol and other drug-impaired driving crashes, the NTSB has called for in-vehicle alcohol detection technology, the lowering of the blood alcohol concentration limit to .05 g/dL or lower, alcohol ignition-interlock devices for people convicted of driving while intoxicated and recommended that regulators develop a standard of practice to improve drug toxicology testing.

The NTSB has also called for a comprehensive strategy to eliminate speeding-related crashes that combines traditional measures like enforcement and regulation with new technological advances like speed limiters and intelligent speed adaptation technology.

100% of the detection device costs should be paid for by a tax on alcohol. Non drinkers should not have to pay for this.