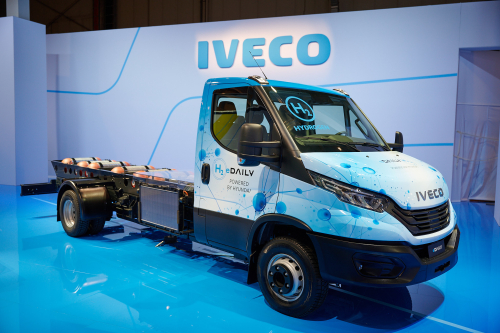 Since signing a Memorandum of Understanding (MoU) in March 2022, the two companies have formed multiple joint working groups on various technological streams to explore ways that they can complement each other on the development of electric vehicles and alternative propulsions.

The working eDAILY FCEV prototype is equipped with Hyundai’s 90 kW hydrogen fuel cell system and 140 kW e-motor. Six tanks offer a combined storage capacity of 12 kg of hydrogen. The GVW (Gross Vehicle Weight) 7.2 ton prototype has been tested in Europe, confirming a driving range of 350 km, maximum payload of 3 tons and a refueling time within 15 minutes.

While eDAILY BEV, also launched at the IAA, is best suited for short journeys, eDAILY FCEV will be an ideal option for deliveries where long range with high payload is necessary.

An integral part of the eDAILY FCEV is the battery pack by FPT Industrial, the powertrain brand of Iveco Group, while the fuel cell system provided by Hyundai is the latest step in the company’s 20+ year hydrogen mobility journey.

Hyundai’s fuel cell technology is already in use in various applications, and especially in the commercial vehicle sector. The system logged over 4.5 million km in Switzerland on heavy duty trucks showing its performance and reliability.