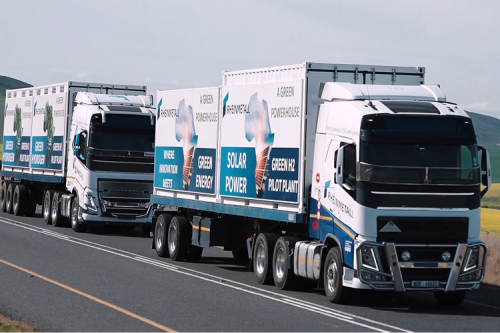 Suitable for use in undeveloped terrain, it does not require an external power supply. Moreover, because the system can simultaneously produce oxygen, it offers an all-encompassing solution for mobile field hospitals. Armed with this technology, Rheinmetall is not only expanding its civil sector operations as part of its hydrogen strategy: the Group’s plant engineering skills have put it on the path to becoming an energy producer.

The concept is based on electrolysis; electricity necessary for this is produced with solar panels. Wind and Hydropower can also be used to produce the required electricity.

Developed by Rheinmetall, all the components of this modular system can be combined into a fixed stationary system mode as well as into mobile applications of various scopes. With larger mobile set-ups, such as field hospitals, the conversion of solar power, electrolysis, storage of the hydrogen produced, and fuel cell based electrical generation takes place in separate containers.

The necessary modules can all be concentrated in a single container, operated by solar panels for producing electricity as well as water, thus further enhancing its potential for mobile operations.

Mobile production of green hydrogen lends itself to industrial, private and expeditionary contexts as a means of generating power and heat. Byproducts such as oxygen can either be used for their own requirements or sold into the global commodity market. The hydrogen produced by the system can either be kept in situ or transported to a different destination.

Production volume can be tailored to meet individual requirements. A container solution consisting of four standard sea containers can supply power for 30 to 40 households. The different systems, whether for tent cities, field hospitals, or stationary solutions, enable not just the production of green hydrogen as a future energy source, but also self-sufficiency and maximum mobility in undeveloped places or in off-grid commercial applications where electricity is lacking.