The US Department of Energy (DOE) released draft guidance for a Clean Hydrogen Production Standard (CHPS), developed to meet the requirements of the Bipartisan Infrastructure Law (BIL), Section 40315.

The CHPS is not a regulatory standard, and DOE may not necessarily require future funded activities to achieve the standard. However, hydrogen hubs funded in support of the BIL (earlier post) will be required to “demonstrably aid achievement” of the CHPS by mitigating emissions across the supply chain to the greatest extent possible (e.g., by employing high rates of carbon capture, using low-carbon electricity, or mitigating upstream methane emissions).

Future DOE funding opportunity announcements will further describe merit review criteria that will be used in selection of successful projects subject to the CHPS.

This initial proposal establishes a target of 4.0 kgCO2e/kgH2 for lifecycle (i.e., “well-to-gate”) greenhouse emissions associated with hydrogen production, accounting for multiple requirements within the BIL provision as well as incentives in the Inflation Reduction Act. 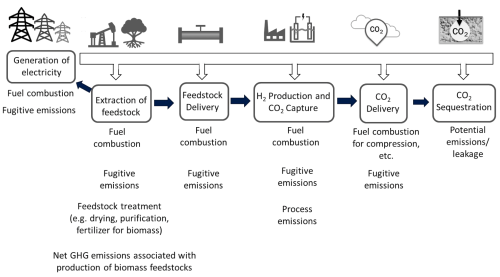 DOE said that this target is likely achievable by facilities that achieve the BIL’s definition of “clean hydrogen” as ≤ 2 kgCO2e/kgH2 at the site of production, and potentially have some additional emissions from upstream and/or downstream processes.

Fossil fuel systems that employ high rates of carbon capture or other thermal conversion processes such as pyrolysis, electrolysis systems that primarily use clean energy (e.g., renewables, nuclear), and certain biomass-based systems (e.g., gasification, reforming of renewable natural gas) are all generally expected to be capable of achieving 4.0 kgCO2e/kgH2 on a lifecycle basis using technologies that are commercially deployable today.

For example, a steam methane reformer with ~95% carbon capture and sequestration (CCS) could achieve ~4.0 kgCO2e/kgH2 lifecycle emissions by using electricity that represents the average U.S. grid mix and ensuring that upstream methane emissions do not exceed 1%. Electrolysis systems that source about 15% of their electricity from the grid and the remainder from clean energy sources could also achieve ~4.0 kgCO2e/kgH2 lifecycle emissions. Both of these systems, and other pathways for hydrogen production (e.g., biomass gasification or reforming of renewable natural gas) could also achieve emissions lower than 4.0 kgCO2e/kgH2 through optimized design choices, such as the use of greater shares of clean electricity and low-carbon forms of biomass.

Over the coming decade, hydrogen production technologies that achieve the lifecycle target are also expected to become economically competitive through a combination of research, development, demonstration, and deployment to ultimately achieve economies of scale and private sector market lift-off.

In this draft guidance, DOE seeks stakeholder comment on its proposal to implement CHPS, as required by statute. Comments are requested by 20 October 2022.