The 2023 Mitsubishi Outlander PHEV, the next generation of the world’s best-selling plug-in hybrid electric vehicle (PHEV), is rated to offer 38 miles of all-electric range from a 350-volt, 20kWh lithium-ion battery pack mounted below the floor and between the wheels for a low center of gravity, but minimal loss of ground clearance. This is a 40% improvement in electric range over the previous model. 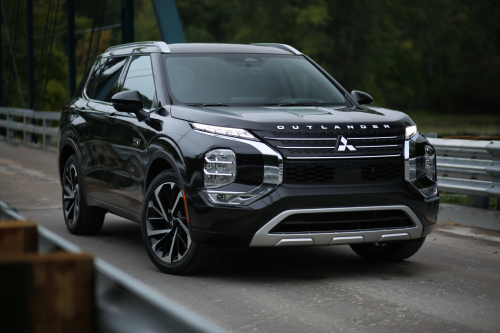 Making use of the onboard DC fast-charger, the pack can be filled to 80% capacity in approximately 38 minutes; 2023 Outlander PHEV is the only non-luxury-brand plug-in hybrid in the US to offer fast-charging. The vehicle also can be charged from a level- 1 or level-2 wall charger, or via the internal combustion engine itself using Charge Mode while driving or parked.

Matched with a 2.4-liter MIVEC four-cylinder Atkinson Cycle gasoline engine and expanded 14.8-gallon fuel tank, the vehicle features a 64 MPGe rating, and will offer up to 420 miles of combined electric-gasoline range on a single charge and single tank of fuel.

The 2023 Outlander PHEV is fitted with a new generation of Mitsubishi Motors’ twin-motor Super All-Wheel Control (S-AWC) system, utilizing the gasoline engine and front motor to drive the front wheels, and a stand-alone rear-mounted motor to drive the rear axle.

The 2023 Outlander PHEV will go on sale in select US markets starting in November, followed later by availability across the whole country. The seven-passenger 2023 Mitsubishi Outlander PHEV will carry a Manufacturer’s Suggested Retail Price (MSRP) starting from $39,845.

Bump the capacity to 50 miles and use LiFePO4 cells in a blade pack with 10000+ 80%DOD cycle life and I will buy one tomorrow. Otherwise a conventional LI-ion be it NMC or high Ni cathode will not tolerate 80% DOD for more than a 1000 cycles that's only 38k miles on that pack of you use it primarily for commuting. 50 miles is a true 40 miles 80% DOD pack and with LiFePO4 cells and their normal 10000+ K cycle life that's 400,000 miles and well worth the PHEV premium economically. Otherwise it's a loss for sure economically.