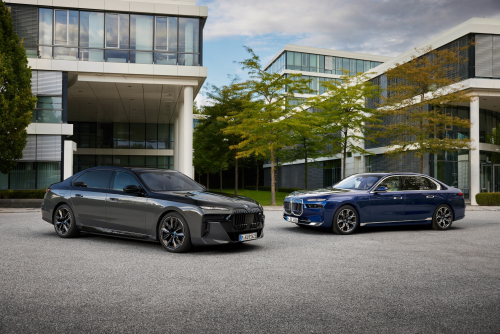 The drive systems fitted in the two plug-in hybrid models bring together a six-cylinder in-line engine with BMW TwinPower Turbo technology and an electric motor integrated into the eight-speed Steptronic transmission. In both cars, the power generated by the two drive units is channelled to the road via the BMW xDrive intelligent all-wheel-drive system.

The electric motor fitted in the two models features the latest generation of BMW eDrive technology for plug-in hybrid models. The synchronous motor with a specific power output of more than 5.0 kW/kg has a rated output of 145 kW/197 hp in the two PHEV variants and its rev band has been stretched to a maximum 11,500 rpm.

In addition, a pre-gearing stage is used to increase the torque produced by the electric motor to an effective maximum of 450 N·m (332 lb-ft) at the transmission input on the engine side. This innovation, patented and used for the first time by BMW, enables the electric drive system integrated into the transmission housing in a compact, weight-saving design to generate drive torque available either on its own or in addition to the power developed by the combustion engine that could normally only be achieved using a far larger and heavier electric motor.

The optimized power delivery achieved with the pre-gearing stage between the electric motor’s rotor and the transmission’s input shaft makes a clear difference both when accelerating off the line and putting in a quick burst of speed.

The electric motors for the two plug-in hybrid models source their energy from a lithium-ion high-voltage battery installed in the vehicle floor, which is likewise the product of fifth-generation BMW eDrive technology. At 18.7 kWh, the battery’s usable energy content is more than 50% higher than that available with the previous generation of the technology.

Maximum AC charging power is 7.4 kW. In combination with the efficiency of the electric motor and intelligent energy management including adaptive recuperation, this gives the new BMW M760e xDrive an electric range of 77 – 85 kilometers / 48 – 53 miles (provisional values) in the WLTP cycle and the new BMW 750e xDrive a range of 78 – 87 kilometers / 48 – 54 miles (provisional values) as per WLTP.

The 3.0-liter six-cylinder in-line diesel powering the BMW 740d xDrive has new steel pistons which enable particularly high combustion pressure and enrich the engine’s soundtrack. The effectiveness of the oil separation process has also been enhanced compared with the predecessor engine. The new common-rail direct injection system now works with solenoid valve injectors which provide up to 12 injections per power stroke with maximum pressure of 2,500 bar.

The latest generation of mild-hybrid technology ensures the additional power comes on tap with particular immediacy and the level of recuperation is high, so as to improve efficiency. The electric motor is integrated—together with its power electronics—into the housing of the eight-speed Steptronic transmission, where it also assumes the role of a crankshaft-driven starter generator.

The rapid power delivery of the electrified drive system enables acceleration from 0 to 100 km/h (62 mph) in 5.8 seconds. Added to which, the high-precision interplay between the combustion engine and electric motor enhances the efficiency and smoothness of the drive system, making it suited for service in the new BMW 7 Series.