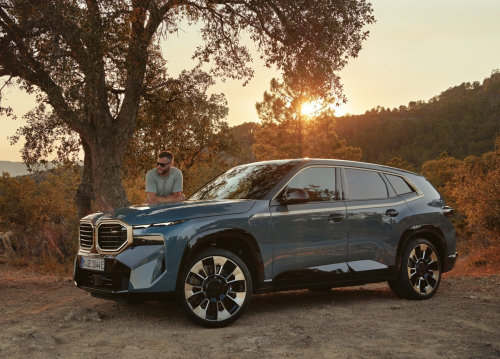 The BMW XM is also the first BMW M original since the BMW M1. Production of the BMW XM will get underway at BMW Group Plant Spartanburg in the USA in December 2022 before it arrives at dealers worldwide in spring 2023. The key sales markets will be the USA, China and the Middle East.

The M HYBRID drive system in the BMW XM delivers an overall output of 480 kW/653 hp (generated by the combination of the combustion engine with up to 360 kW/489 hp and the electric drive system with up to 145 kW/197 hp). It is underpinned by a newly developed, classically high-revving V8 engine with M TwinPower Turbo technology. The 4.4-liter unit features a cross-bank exhaust manifold and an optimized oil separation process. 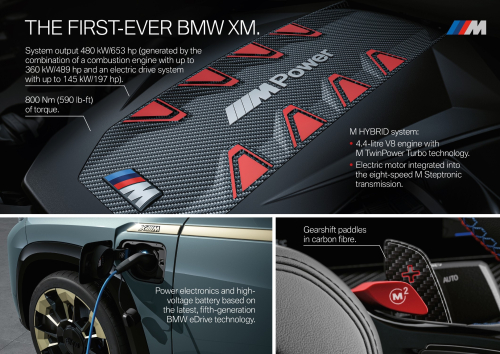 The eight-cylinder engine is assisted in its task by an electric motor integrated into the eight-speed M Steptronic transmission. The M HYBRID drive system produces maximum overall torque of 800 N·m/590 lb-ft (engine with up to 650 N·m [479 lb-ft] combined with electric motor developing up to 280 N·m [206 lb-ft]). A pre-gearing stage increases the electric motor’s effective maximum torque to 450 N·m (332 lb-ft) at the transmission input.

The intelligently managed interplay between engine and motor delivers an immense build-up of power that begins instantaneously and is sustained throughout the rev range. The BMW XM sprints from 0 to 100 km/h (62 mph) in 4.3 seconds, accompanied by an energy-charged soundtrack of rare emotional appeal for an eight-cylinder unit. This originates from its sports exhaust system featuring electronically controlled, continuously adjustable flaps and hexagonal dual tailpipes arranged one above the other for the first time on a BMW M model.

The M Hybrid button on the center console is used to select one of three operating modes, including an ELECTRIC setting for cruising with zero local emissions at speeds of up to 140 km/h (87 mph) and over a maximum distance of 82 – 88 km (51 – 55 miles) in the WLTP cycle. The lithium-ion high-voltage battery is mounted in the car’s underbody and provides 25.7 kWh of usable energy. The Combined Charging Unit in the BMW XM enables AC charging at up to 7.4 kW.

Power is channelled to the road via the all-wheel-drive system M xDrive, the rear-biased setup of which is particularly noticeable in 4WD Sport mode. Drivers can also select 4WD Sand mode, which has been conceived specifically for driving over dunes and similar surfaces. Operation of the M Sport differential in the rear axle is also fully variable.

Traction, agility and directional stability all benefit from both the near-actuator wheel slip limitation and the networking of all control systems within the integrated transverse dynamics management. The M Sport brakes work in tandem with an integrated braking system that presents the driver with two pedal feel settings. 21-inch M light-alloy wheels are fitted as standard, while there is also the option of 22-inch or 23-inch M light-alloy wheels.

Parking Assistant Plus is also included as standard. In addition to the Reversing Assistant this system comprises the functions Parking View, front and rear Panorama View and 3D View.

The BMW XM comes as standard with BMW Live Cockpit Professional, which brings with it an M-specific version of the latest-generation multi-sensory vehicle experience BMW iDrive. Based on BMW Operating System 8, it comprises a BMW Curved Display formed by a 12.3-inch information display and a control display with a screen diagonal of 14.9 inches. The new display grouping and the ever-expanding capabilities of the BMW Intelligent Personal Assistant mean the new BMW iDrive has been deliberately geared towards touch operation and gesture control as well as dialogue using natural language.

The iDrive Controller and multifunction buttons on the steering wheel are additionally joined in the standard specification roster by the BMW Head-Up Display and BMW gesture control.