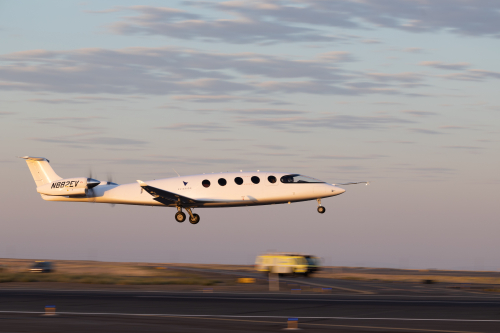 Eviation Alice is targeted at commuter and cargo markets, and will typically operate flights ranging from 150 miles to 250 miles. Cape Air and Global Crossing Airlines, both US-based regional airlines, have placed orders for 75 and 50 Alice aircraft respectively. In 2021, DHL Express announced that it ordered 12 all-electric Alice eCargo planes from Eviation, making it Eviation’s first cargo customer.

Our compliments to Eviation on the successful first flight of Alice! Completing its maiden flight confirms our belief that the era of sustainable aviation is here. With our order of 12 Alice e-cargo planes, we are investing towards our overall goal of net-zero emissions logistics. Alice’s range and capacity makes it a unique sustainable solution for our global aviation network, supporting our aspiration to make a substantial contribution in reducing our carbon footprint and ultimately, achieving net-zero emissions by 2050. 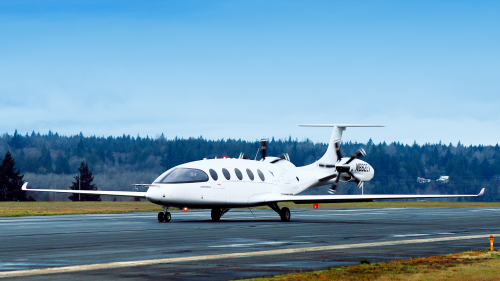 The all-electric Alice aircraft features a maximum operating speed of 260 knots and a maximum useful load of 2,500 lbs for passenger version and 2,600 lbs for eCargo version. 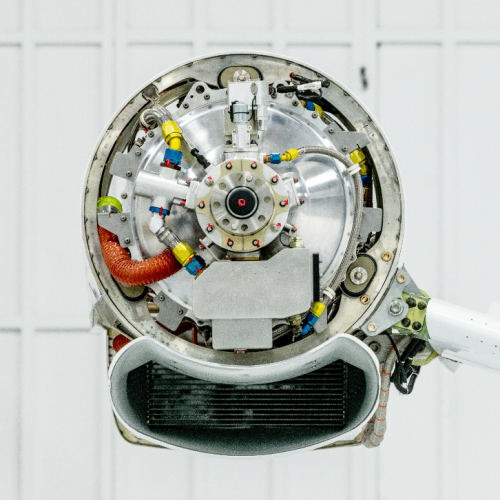 Alice is powered by two magni650 electric propulsion units (EPUs) from magniX, the only flight-proven electric propulsion systems at this scale. The magni650 EPU is a 850 SHP / 640 kW / 3,000 N·m – class EPU. Each EPU includes a magni650 motor, 4 X magniDrive 100, and a closed-loop integrated thermal management system.

The EPU is designed to provide the required torque and power turning at low RPMs, the same speed as the propeller. This allows a direct motor-to-propeller connection, eliminating the need for a heavy maintenance-prone gearbox.

A 4×3-phase architecture allows for redundancy, increased reliability and graceful degradation should a fault occur. For example, in the event of a short circuit, one 3-phase section can be turned off, allowing the pilot 75% of full power.

The magniDrive 100 is a multi-application, high-performance power electronics unit including both the inverter and motor controller functions. It is designed as ‘bi-directional’, capable of both DC/AC operation for propulsion and AC/DC operation for generation. It is suitable for HVDC networks of up to 800 VDC.

Designed for unpressurized operation, the magniDrive 100 combines high thermal performance, EMI immunity and lightning protection for metallic and composite structures. The magniDrive 100 can support both analog throttle inputs (for use in retrofits, for example) as well as Fly-By-Wire controls (for newly designed aircraft). 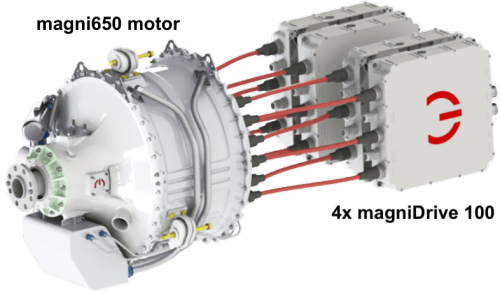 One of the fastest growing sources for GHG is air transport, with light aircraft predicted to form a high percentage of that.

This is an excellent case for very severe regulation to enforce decarbonisation, with hopefully the progress made thereby helping other fields.

Battery electric, fine, where it has the performance envelope, otherwise fuel cells are needed, or perhaps SAF etc as the very informed likes of Gryf argue.

They could begin by making airlines pay the same excise and carbon taxes as land based transport.
I am very skeptical about battery powered flight (range+payload) and only slightly less about fuel cell powered flight (H2 source).
However, if you add a kerosene powered generator to Alice and turn it into a hybrid, it could be interesting as it looks like a very efficient aircraft, whatever the power source.
Obviously, if someone comes out with noticeably better batteries, it changes the game, (but battery progress is rather sluggish at present).
Especially if you want 80% cycle discharge per flight, rapid recharge, high cycle count, high power and high energy and safety and low specific mass all at the same time.

Just so, stop the freebies first, which by an uncanny coincidence always seem to happen to benefit the well off, not the man on the proverbial Clapham omnibus.

@Dave: Indeed.
Here is a wiki article on horsebuses!

which the Clapham omnibus was.

it is an interesting, and short, read.

Although not (quite) old enough to remember horse drawn buses, as a very small child in post war Britain they used to deliver coal to my house using a horse and cart.

Interestingly, although not horse drawn, some of the alternative hydride or hydrate based hydrogen storage materials might be deliverable in the autumn to houses, where they could provide winter heat, then being returned to the depot for recharging with hydrogen with summer solar power.

Just so.
Although some here may not think so, I am a big fan of batteries, so long as they are used within their real, not imaginary, performance envelopes.

Unbeatable cost per mile in fuel then.

I prefer battery swapping rather than fast charging with current chemistries, although of course that entails paying for more batteries.

My prediction is we are actually closer to batteries that will enable mass electric air transport than it may seem. Recent advancements in Lithium Sulfur in particular show promise for a 4-5 times increase in energy density.

Progress is possible and happening, and I am a fan of lithium sulfur in particular.

The question is though how far and with what payload.

Batteries can do the job for some modest ranges etc, and that envelope will increase.

But there is no way in God's earth, or over it, that they can do intercontinental etc, they two orders of magnitude too heavy for the energy.

So other things will be needed for the heaviest and furthest range flights, the only questions are what, and where the balance shifts exactly.

To give an idea of present day capabilities, training flights are being increasingly ruled by electric planes, with unbeatable fuel costs for two people for half hour flights.

The batteries need swapping out after two years though, hammered by fast charging, and are then used in less demanding applications such as grid support.

And for the final qualifying flight of two hours, ICE aircraft have to be used.

So there is a heck of a long way to go for most applications.

Can’t wait to stop buying Avgas at twice the normal gasoline market. Trainers are the obvious first market for E-planes since most flights can be short and return to their origin. Initial investment and charging times are a huge issue, but there’s a piece often overlooked. As a pilot I can tell you that a good part (at least a third for most people) of my training was propulsion system management. It was the easy part as I am a mechanical engineer by training and an engine engineer by by vocation. Point is, the fleet will be decades to turn electric whenever it starts in ernest. So FAA will keep those training requirements for even longer. So if you train in an electric you will probably have to get remedial training in an ICE to pass your Check Ride and most certainly will need serious type training before operating real GA aircraft.

Many thanks for sharing your expertise!

The original tri-motor design was ridiculed here for its wingtip motors and potential for massively asymmetric thrust. This far more conventional centre-line thrust design was predicted in the same comments (by me) and will improve with every new generation of batteries.

@Tim Duncan,
You said: “Point is, the fleet will be decades to turn electric whenever it starts in ernest.”
As a Boeing retiree, it is worthwhile to look into the history of aviation. The first flight of the De Havilland 106 Comet jet airliner was on July 27, 1949. On October 26, 1958, Pan American World Airways started commercial air service in a Boeing 707 from New York to London. Less than a decade and piston powered aircraft were essentially dead for commercial aviation. General Aviation could now follow this path since electric power is significantly cheaper than leaded Avgas piston powered aircraft.