A tax on frequent flying could generate revenues needed to deeply decarbonize aviation through midcentury while concentrating the cost burden on those who fly the most, according to a new study from the International Council on Clean Transportation. (ICCT)

The study comes as policymakers gather in Montreal this week to finalize a net-zero emission goal for international aviation. The International Civil Aviation Organization (ICAO) estimates that $4 trillion in technology investment may be needed through 2050 to achieve emissions reductions compatible with a 1.75 degree C cap on global temperature. This translates to an annual investment of $121 billion.

The report explores two methods for raising this amount of annual revenue: a flat, per-flight air passenger duty (APD) at $25, and a frequent flying levy (FFL) that increases with each flight taken in a year (from $9 to $177). The FFL is designed to place an escalating tax burden on people who fly frequently.

The study found that, compared to the flat APD, an FFL would shift the tax burden from occasional fliers toward wealthier frequent fliers. Specifically, the study estimates that a global FFL would generate 81% of its revenue from frequent fliers (those who take more than six flights a year, or about 2% of global population) and 90% of its revenue from the world’s richest 10%.

If all FFL revenues were used to support technology development, the levy could also address country disparities in access to capital for clean aviation. Under an FFL, 67% of the revenue collected would come from developed countries, compared to 51% under a flat APD. This shift in cost from lower-income to high-income countries would support ICAO’s goal of providing financial support for net-zero aviation in the Global South.

An FFL would also closely track each country’s historical emissions, since high-income countries emitted about 70% of aviation CO2 between 1980 and 2019. 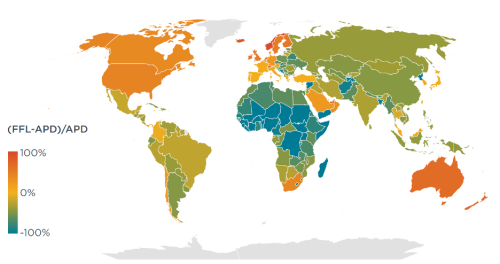 Percentage difference in total APD collected and total FFL collected for each country. Countries shaded in orange and red would pay more under an FFL, while those shaded in green and blue would pay less, compared to an APD. Source: The ICCT

Taxing frequent fliers regardless of their passport would align the costs of decarbonization with historical responsibility for emissions. And it could be done without distorting competition across countries or carriers.

The APD and FFL analyzed in this study would both reduce demand for flying by about 7%, but in different ways. Under an FFL, the population with the top 5% of income would reduce flying by 12%, while the impact on the bottom 80% would be negligible.

Implementing a global FFL would require significant efforts, such as creating an accurate and privacy-protected flying frequency database and establishing a governance framework for revenue usage. Regardless of whether an FFL is implemented, this study provides evidence that funds for aviation decarbonization could be raised in an equitable manner.