Logistics company Hegelmann Group, which operates in Europe, and Mercedes-Benz Trucks signed a Letter of Intent for the order of 50 eActros LongHaul electric trucks (earlier post) at this year’s IAA Transportation in Hannover. The vehicles are to be delivered to the family-owned company from Bruchsal, Germany with the start of series production in 2024. 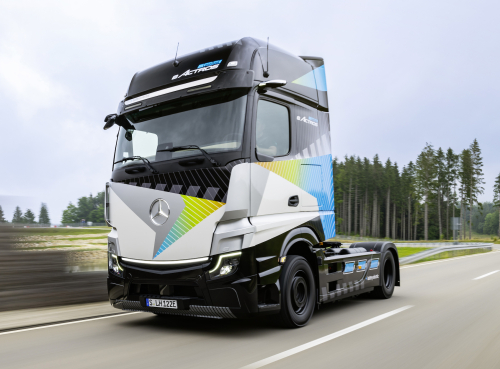 Following its presentation at the IAA in Hannover, the eActros LongHaul will be tested on public roads for the first time this year. Intensive customer testing with near-series production ready prototypes is also planned for 2023. In this context, letters of intent were already signed with Amazon and Rhenus in September. (Earlier post.)

On a single battery charge the eActros LongHaul will have a range of around 500 kilometers (311 miles). Mercedes-Benz Trucks’ development engineers are designing the eActros LongHaul for the same vehicle and component durability requirements as a comparable conventional heavy-duty long-haul Actros. That means 1.2 million kilometers of mileage over ten years of operation.

The eActros LongHaul uses batteries with lithium iron phosphate (LFP) cell technology, characterized by a long service life and more usable energy. eActros LongHaul’s batteries can be charged from 20 to 80% in well under 30 minutes at a charging station with about one megawatt of power.

In addition to the semitrailer tractor, Mercedes-Benz Trucks is also producing flatbed chassis variants of the eActros LongHaul right from market launch. This offers customers numerous other possible applications in all-electric transport.