The focus of the collaboration is OneD’s SINANODE platform. Silicon can store ten times the energy of graphite alone yet previous attempts to include more silicon in the anode faced challenges of silicon expansion and breakage. 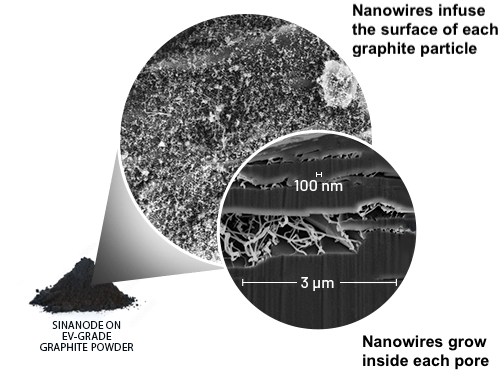 With the infused silicon evenly distributed and permanently embedded into the graphite, the silicon nanowires have an available reversible capacity of 3,250mAh/g and a lower cost per kWh than graphite alone. SINANODE technology allows wet or dry electrode coating, offering further cost reductions.

GM designed Ultium to be a supremely flexible platform so we can continuously improve our cells as battery technology advances. Our collaboration with OneD will focus on efforts to continue advancements in EV range, performance and cost.

The collaboration on silicon anode technology is believed to be the first of its kind between two US companies. GM is rapidly scaling its Ultium EV Platform to reach 1 million units of annual EV manufacturing capacity in North America by 2025. Earlier this year, GM’s first Ultium Cells joint venture battery plant began production in Ohio, with two additional US plants under construction and a fourth also planned.

At the same time, GM is building on more than a decade of advanced battery research and development with its new Wallace Battery Cell Innovation Center in Warren, Michigan, which was completed earlier this year to help ramp up significantly development and production of next-generation Ultium batteries, along with production methods that can quickly be deployed at battery cell manufacturing plants.

Fifteen years of OneD research and development has led to a portfolio of more than 240 granted patents. This enables OneD’s business model to center on licensing the SINANODE technology to industrial partners and scale manufacturing faster and at a lower cost. Given a licensing business model and low operational costs, Series C funds will be used to continue SINANODE research and development, while advancing pilot production and providing OEMs and battery manufacturers a seamless integration into the manufacturing of EV batteries via licensed manufacturing partners.

So far the progress of battery technology has been relatively slow. The best energy density of massed produced, affordable traction batteries is about 150-250 Wh/kg.
We have a long way to go. Every day brings more positive news of laboratory breakthroughs; but, these are only words of encouragement until the advancements can be put into mass production and priced fairly.