Flaring practices allow more methane into the atmosphere than thought; simple fixes can have big impact

Oil and gas producers rely on flaring to limit the venting of natural gas from their facilities. New research led by the University of Michigan shows that in the real world, this practice is far less effective than estimated, releasing five times more methane in the US than previously thought.

Methane—which can be a byproduct of oil production—is a powerful greenhouse gas. Burning methane by flaring as it is released converts it to carbon dioxide, another greenhouse gas but one that is less harmful on a pound-by-pound basis. The new data suggests we have overestimated flaring’s effectiveness and, as a result, underestimated its contribution to methane emissions and climate change. A paper on the work is published in Science. 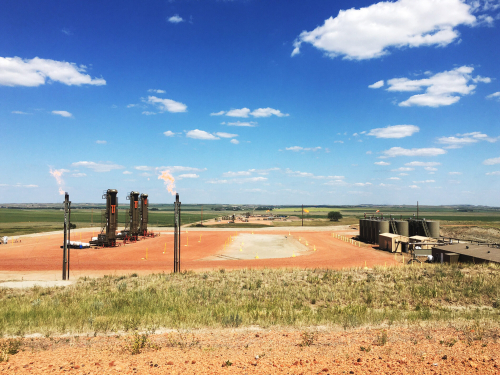 Multiple flares observed in operation in the Bakken Formation in the Williston Basin in North Dakota, 2021. Image credit: Alan Gorchov Negron, University of Michigan and Yulia Chen of Stanford University

Industry and regulators operate under the assumption flares are constantly lit and that they burn off 98% of methane when in operation. Data taken via aerial surveys in the three US geographical basins, which are home to more than 80% of US flaring operations, shows both assumptions are incorrect.

Flares were found to be unlit approximately 3%-5% of the time and, even when lit, they were found operating at low efficiency. Combined, those factors lead to an average effective flaring efficiency rate of only 91%.

Over the course of three years, researchers made 13 flights in planes equipped with air monitoring equipment to assess how much methane is released from flares across oil and gas production basins. Flights were conducted in the Permian and Eagle Ford oil and gas fields in Texas, as well as the Bakken oil and gas field in North Dakota.

Planes flew downwind of flaring sites, crisscrossing the direct pathways of the air plumes released by flaring. Tubes and pumps drew air into the onboard instrumentation, where laser scanning at a specific frequency measures the amount of carbon dioxide and methane it carries.

Measuring both gasses simultaneously allowed researchers to estimate the destruction removal efficiency of flaring at an individual site.

If the flare is operating as it should be, there should be a large carbon dioxide spike and a relatively small methane spike. And depending on the relative enhancement of those two gasses, we can tell how well the flares are performing.

This appears to be a source of methane emissions that seems quite addressable. With management practices and our better understanding of what’s happening to these flares, we can reduce this source of methane in a tangible way.

Recent research led by nonprofit EDF similarly found that roughly 10% of flares are unlit or malfunctioning.

The lack of personal responsibility for damages for executives and shareholders results in pillaging and wanton destruction.

There are severe health effects to local people from flaring etc.

If they were paid for, aside from GWG emissions, then the corporate profits disappear.

Let's hope they can fix the "flaring" from the Nordstream 1 and 2 pipelines in the Baltic sea.

No more gas is being piped into the pipelines, so pressure has now equalised and there are no further emissions.

It looks like no more will be put into the pipelines in future.

@Dave, that is good news, except that the pipes will now corrode due to seawater, which is not good for resuming transfers once the war is over and resolved to everyone's dissatisfaction.

I doubt any resumption.
Russia is proven to be unreliable, and renewables have the potential to completely replace the supplies from there.

My last comment includes renewables from Ukraine, which has enormous potential:

It looks as though I overstated the case:

Synthesized multilayered perovskite soalar cells have an efficiency of 40% and reach a life expectancy of 30 years; they're far cheaper than silicon cells.
Glass pyramid concentrator for solar cell applications
https://www.pv-magazine.com/2022/06/29/glass-pyramid-concentrator-for-solar-cell-applications/
Those solar cells combined with glass-pyramid-concentrators enable an overall efficiency somewhere between 60 to 80% efficiency; that is a "house number"!
No trackers and no maintenance, just a purely passive system and best of all - no dependencies on cutthroats and no pollution like from fossils.