Australia-based Pure Hydrogen Corporation has entered an arrangement with PepsiCo Australia to trial a hydrogen-fueled prime mover at one of PepsiCo’s manufacturing sites in the City of Brisbane. Pure Hydrogen will supply PepsiCo with a Hydrogen Fuel Cell 160kW 6 x 4 Prime Mover (HFCV Prime Mover). The company will also provide additional hydrogen fuel as required, including refueling along with arranging repair & maintenance services. 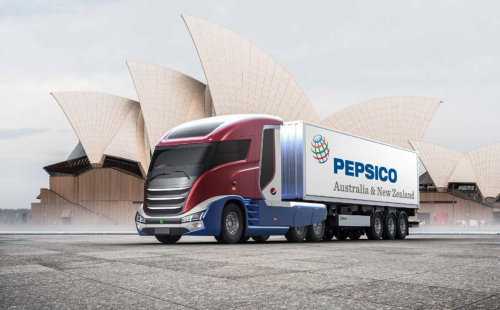 The trial will commence in 2Q 2023 and will run for approximately 6 months. Following the trial PepsiCo will assess the commercial use-case with the potential to order further hydrogen powered vehicles over the period 2023-25.

The PepsiCo trial marks the latest in a number of trials that Pure Hydrogen is undertaking in the domestic marketplace. Its other partners include JJ Waste & Recycling, which is scheduled to trial Australia’s first Hydrogen Fuel Cell Refuse Collection Vehicle (HFCRCV). The trial also forms part of Pure Hydrogen’s broader market strategy to demonstrate the commercial use-case of affordable hydrogen and hydrogen fuel cell vehicles.

Pure Hydrogen expects its net cost of this initiative will be about $410,000 for the trial which if successful creates a growing hydrogen clean energy market.