At its Dingolfing plant, the BMW Group is implementing a modular production system for chassis components to ensure even more flexibility in the production of different vehicle variants—whether all-electric, hybrid or classic combustion engine, whether all-wheel drive or rear-wheel drive. This also has advantages for the environment.

In the component plant 02.10 of the BMW Group Dingolfing location, all axle carriers for the different drive variants will run over the same production line in the future. After the production system has been covering partial scopes of axle production with success since 2019, it is now fully used with the new BMW 7 Series.

With the new system, the Dingolfinger Werk 2.10 produces all axle carriers of a series, regardless of the type of drive, each within a production line. Instead of building the components one after the other in a concatenation of the individual steps as before, the production of several variants can now also take place in parallel.

The division of the modules is reminiscent of a herringbone pattern, because the components are transported via a central axis to the next step in the welding stations located on the right and left. Digitally controlled, they always come directly to the next free station, which is the right one for the derivative-specific follow-up process. Waiting times are omitted because the most time-consuming variant no longer sets the pace for all subsequent components. This increases the flexibility in volume planning for the respective derivatives and also facilitates the integration of new variants into existing production processes, because only individual stations need to be replaced or adapted if necessary. The production volume or throughput can also be easily scaled by adding additional workstations.

Modular axle carrier production relies on flexible automation instead of static devices. In the new system, robots position the components for the individual process steps. 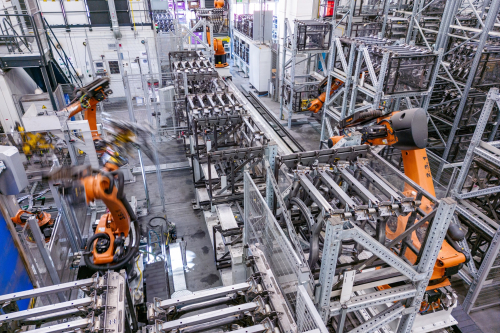 For example, two robots grab and hold the required parts and bring them to the right position to tenths of a millimeter; a third robot welds them together. This also facilitates the change between different vehicle derivatives, as the gripper systems of the robots can pick up and position different parts.

Instead of an elaborate conversion of steel devices weighing tons, only a change in the robot program is necessary.

This allows us to react to changing market requirements or regulatory requirements in the short term, and change the mix of manufactured variants during operation. This gives us extremely high flexibility and we optimally utilize our production capacities.

At the same time, the production system promotes further digitization throughout production by intelligently linking a wide variety of production data and process parameters.

Twenty-five tons of steel per year are saved by the fact that the previous 1.25-ton steel devices are replaced by flexible gripper systems. The new gripper devices are about one ton lighter. Converted into emissions, this means around 37.5 tons less CO2 emissions.

In addition, the robot grippers are versatile and can be used in the longer term, they still fit even after model changes and thus additionally increase the sustainability of production.

In addition to the decreasing use of materials, the conversion of the previously pneumatically operated welding stations to the now all-electric systems also brings an ecological plus: The absence of compressed air during the handling of the axle carriers reduces the energy demand of the process by more than 90% from around 18,000 kilowatt hours to approximately 900 kilowatt hours a year. This roughly corresponds to the difference in the annual energy consumption of four families of four in single-family homes to a single person with a small apartment.

The necessary investments also decrease by around a fifth compared to conventional manufacturing systems. In addition, the innovation shows that the plant successfully masters the transformation towards electric mobility with its in-house component production and thus also secures jobs at the Dingolfing site.