Benchmark: China will increase share of global cathode production to 87% in 2030

Data from Benchmark Mineral Intelligence’s Cathode Forecast shows that China is set to extend its dominance of cathode production by 2030, increasing its share of production from 78% in 2022 to 87% in 2030. China’s output of cathode active materials increased more than four times between 2018 and 2022.

The data highlight how China’s total output is set to increase by a further 5.3 times from now until 2030, despite efforts to develop cathode capacity in the rest of the world—forecast to increase only 2.8 times in the same period. 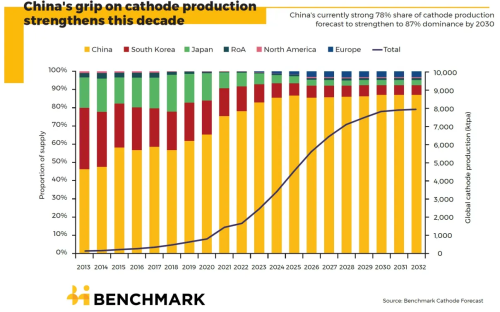 China has a stronghold grip on the market. China will produce far more [cathode active material] than it needs domestically.

—Robert Burrell, an analyst at Benchmark

The country is set to extend its lead due in part to a surge in large-scale cathode projects. The top four Chinese cathode producers in 2022 combined have more than 1.4 million tonnes of cathode capacity in planning or under construction.

Many of the cathode facilities in planning or under construction are from Tier three producers, who currently do not supply the EV market. This tier currently makes up just under a quarter of China’s cathode production in 2022, but will grow to nearly half by 2030, Benchmark said.

Tier One producers, those which can supply ex-China automotive markets, will see the lowest growth in the country of all the tiers, and will shrink from 66% of production in 2022 to just 43% in 2030.

Which cathode chemistry a facility makes strongly influences in which tier it is likely to be. In 2030, 56% of LFP production in China is forecast to be from Tier three producers. This contrasts to NCM 811 which only has 16% from Tier three, as there is a high demand outside of China for the material.

Central to China’s growth is its LFP cathode industry, which Benchmark forecasts will account for 69% of the country’s cathode output in 2030, up from 44% in 2022. Despite some planned LFP facilities outside of China, Benchmark forecasts that in 2030 China will produce 98% of the world’s LFP.

LFP’s safety means it is attractive for energy storage applications. Burrell said that much of the Tier Three LFP produced in the country will go to telecommunication companies who are ramping up grid storage in China.

Between 2022 and 2030, China’s share of NCM production will drop from 39% to 22%. China’s EV demand is less driven by range anxiety as in North America and Europe, leading to a lower demand for high-energy cathodes such as NCM.

The surging LFP demand in China has recently caught the eye of the titanium dioxide (TiO2) industry which generates waste sulphuric acid and iron sulphate which can be used in the production of LFP, Benchmark noted.

This trend has seen five titanium dioxide (TiO2) producers announce plans to develop LFP capacity at a huge scale. The latest of these is GPRO Titanium Industry. In May this year it invested RMB 10 billion ($1.5 billion) for a 200,000 tpa LFP cathode and precursor project due to be operational next year.