MAN Energy Solutions and the Fraunhofer Institute for Surface Engineering and Thin Films (IST) have published their analysis of the framework conditions for the future supply of green hydrogen to the Salzgitter steel site near Hannover. Commissioned by Hydrogen Campus Salzgitter, the study investigates, among other questions, the role locally produced green hydrogen could play to support German supply and its potential competitiveness with imports.

The study’s calculations show that—if used directly without further conversion—local hydrogen can be economical and even cheaper than imports from 2030 onwards. While production costs of around €4.00 per kilogram are possible in northern Germany, hydrogen imported from Tunisia, for example, would cost at least €4.70 to produce—profit margins in both cases not included. 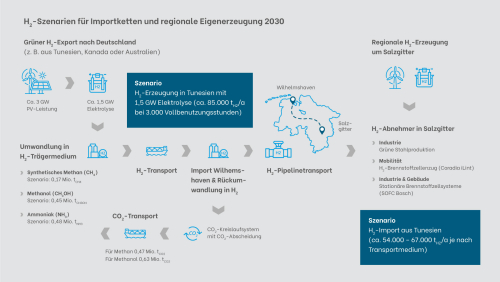 In the case of direct use, local hydrogen has an economic advantage due to the elimination of transport and conversion costs. As such, green hydrogen can be produced in northern Germany at competitive prices and form the basis for a German hydrogen initiative—this is good news for German industry.

For the study, the authors modeled different supply chains for green hydrogen and compared possible import routes, such as those from Portugal, Canada, Tunisia and Australia. Although green hydrogen can be produced much more cheaply in countries with significant amounts of sunshine, it must then be converted for transport to Germany and subsequently back again for domestic use. This process step, which is fraught with costs and losses, drives the total expense above the cost price of H2 produced from wind energy in northern Germany, which can be transported by pipeline to its destination for immediate use.

Of course, we will still need imported hydrogen, and in large quantities, for two reasons. Firstly, due to the limited wind-energy potential in Germany, we can only cover a fraction of the prospective demand from domestic sources. Secondly, the local cost-advantage disappears the moment the hydrogen is not for direct use but rather as a raw material for synthetic fuels such as ammonia, methanol or methane. This will be the case in many instances, as for example in the shipbuilding or aviation industries. Accordingly, in addition to domestic production, we also need strong, international partners and import routes from the sunny or windy regions of North Africa, Patagonia, Scotland and Canada.

Due to its low energy-density and high volatility, pure hydrogen cannot yet be transported economically over longer distances, while ports possess neither tanker fleets nor appropriate infrastructure. Experts therefore assume that international transport will initially scale up via conversion to more conveniently transportable media, such as methanol, ammonia, etc.

Due to low technological maturity and lack of infrastructure, the study by MAN Energy Solutions and IST did not consider liquefied hydrogen or LOHCs (Liquid Organic Hydrogen Carriers) in its analysis.

These technologies may play a role after 2030 but it’s too early to tell.

Posting here is somewhat error prone at the moment, but the gist of a comment I was seeking to make is that national analyses of energy and hydrogen resources can somewhat obscure the view.

There are substantial renewable resources capable of development, which if not German, have a high degree of security of supply and are fairly local, from the likes of the UK North sea, and Irish and Icelandic waters.

They are close enough that conversion to methanol etc would likely not be needed.

And if Russia is beaten back, Ukraine has massive renewables potential.