China dominates the global Li-ion battery supply chain to the extent that removing the country in favor of European or North American alternatives will be difficult, according to analysis by Benchmark Minerals Intelligence. With the exception of mining, China controls at least half of the supply from every step needed to make a lithium-ion battery, according to Benchmark.

Although most lithium, nickel, cobalt, and manganese for batteries is mined outside of China, the majority of all critical minerals for the battery supply chain are further refined and processed in China.

Continuous R&D and technology innovation, fast construction speed of infrastructure and factories, as well as labour advantages, have helped to form a complete chain from mining and chemical all the way to EV-making.

—Albert Li, an analyst at Benchmark 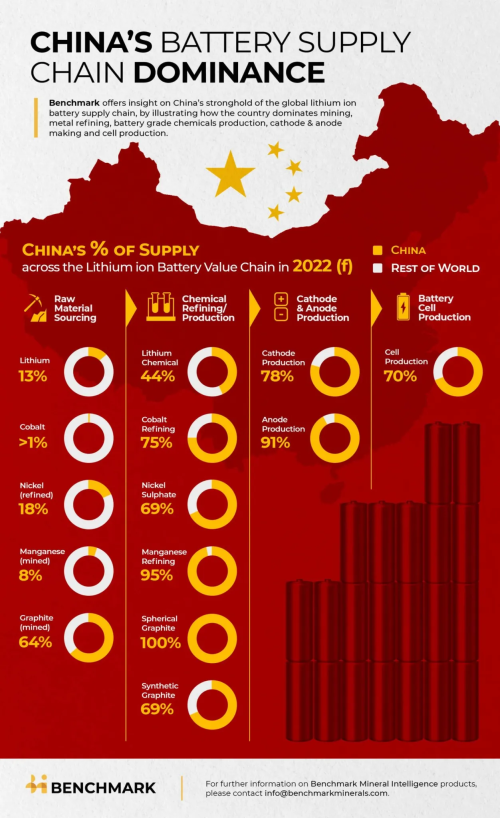 Lithium is typically shipped to China for conversion to lithium carbonate or lithium hydroxide. Almost 60% of lithium refining occurred in China, despite just 13% of lithium being mined there.

The vast majority of cobalt is mined in the Democratic Republic of Congo (DRC); three-quarters of this is then processed by China. Much of this is also sourced from Chinese-owned mines in the DRC.

Of the metals, China has the largest share of refining for manganese. Despite mining less than 10% of the global supply, China refines 95% of it.

The material China has the biggest overall dominance over is graphite, says Benchmark. Not only does China mine 64% of natural flake graphite, it has a monopoly on conversion to spherical graphite needed for anodes. From the mining side, China is forecast by Benchmark to fall second to Africa over the next decade.

More than two-thirds of synthetic graphite, which is produced from petroleum coke, is produced in China. The majority of this comes either from Inner Mongolia where electricity is cheap, or Sichuan province where there is abundant hydroelectric power. However, recent changes in Inner Mongolia electricity policies, and drought in Sichuan put these sources under stress, Benchmark notes.

In 2022, Benchmark forecasts 70% of all batteries will be made in China. This is supported by strong control of the midstream, with a near monopoly over anode production and more than three-quarters of cathode production.

And, why shouldn't China be ahead in battery tech and production when they established a policy to replace internal combustion engines long ago. While we in the U.S., were suffering through the four year Trump administration which built upon moving back to fossil fuel dependency, China was busy innovating.