Air Products plans to invest approximately $500 million to build, own and operate a 35 metric ton per day facility to produce green liquid hydrogen at a greenfield site in Massena, New York, as well as liquid hydrogen distribution and dispensing operations. The commercial operation of this facility is targeted to begin in 2026-2027.

In support of this Air Products’ project, in July 2022, the New York Power Authority (NYPA) board approved 94 MW of low-cost St. Lawrence hydroelectric power to Air Products for its significant investment and the creation of 90 jobs in New York State.

Air Products has determined that the market demand warrants the investment in the project, assuming the receipt of certain local and state incentives, as well as any benefits from the “Inflation Reduction Act” (IRA), and which are anticipated in the current project budget.

The low-carbon intensity liquid hydrogen product from the facility is expected to be sold to the mobility market in New York State as well as other potential northeast industrial markets. If all the hydrogen is used for the heavy-duty truck market, future climate benefits over the project’s lifetime would include avoiding more than six million tonnes of carbon dioxide, which is equivalent to the emissions from over 600 million gallons of diesel used in heavy-duty trucks.

Demand for green hydrogen for mobility and industrial applications is expected to grow significantly in the northeast as a result of the New York-led multi-state agreement to develop a proposal to become one of the regional clean hydrogen hubs designated through the federal Clean Hydrogen Hubs Program, and New York State’s adoption of a new Advanced Clean Trucks (ACT) rule. 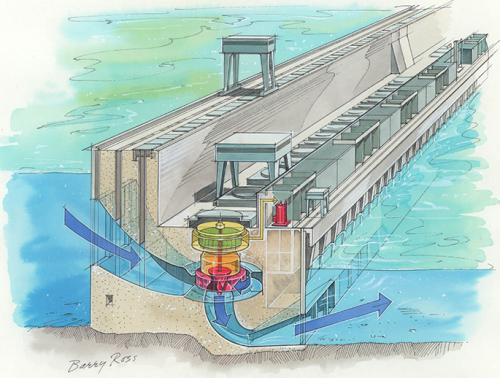 Sixteen of these turbines at St Lawrence combine to produce some 900,000 kW of power for NYPA. Source: NYPA

St. Lawrence-Franklin D. Roosevelt Power Project. The massive dam across the St. Lawrence River on Barnhart Island in Massena, NY, was the NY Power Authority’s first active power plant, opening in 1958. More than half a mile long, the dam and related structures are a cooperative project between the US and Canada: each country operates half of the plant’s 32 turbines. The project also includes two control dams upstream, the Iroquois and Long Sault dams. Altogether the project spans 37 miles.

Good work! Creating H2 fuel from electricity is the best way; Not quite what the oil companies envisioned when they suggested H2 as a substitute for Gasoline...their idea was to continue to produce H2 from Natural Gas feedstock.