Toshiba Corporation has developed large-scale production technology for electrolysis electrodes that realize high level efficiency in Power to Gas (P2G) technology while reducing the use of iridium, one of the world’s rarest precious metals, to 1/10.

P2G uses electrolysis of water to convert renewable energy into hydrogen, for storage and transportation to where it is needed. Polymer Electrolyte Membrane (PEM) electrolysis is seen as a highly promising conversion method, as it is reacts rapidly to power fluctuations and is highly durable. However, PEM uses iridium as the catalyst in its electrodes. Practical application requires reduction of the iridium used.

Toshiba developed an iridium oxide nanosheet laminated catalyst that reduced the iridium requirement to 1/10 in 2017. The company has now developed large-scale production technology that deposits the catalyst over a maximum area of 5m2 at one time. This advance could drive forward the early commercialization of P2G for large-scale power conversion; Toshiba is aiming for commercialization in FY2023 or after.

Large-scale hydrogen conversion of electricity requires a large number of MEAs, and forecasts anticipate a market scale of approximately $580 million by 2028.

However, the MEA electrode relies on a large amount of iridium to ensure sufficient electrolytic efficiency. Iridium is one of the rarest of precious metals. Annual global production is in the region of 7 to 10 tons, far less than the 200 tons of platinum, and it costs four to five times more. Forming electrodes requires a uniform coating of fine iridium oxide particles, but reducing the iridium oxide results in uneven application and non-uniform reactions that degrade water electrolysis performance.

Toshiba’s multilayer catalyst uses a new sputtering technology to deposit alternate layers of iridium oxide nanosheet films and void layers. In sputtering, ions, such as argon, bombard a deposition material, the target, in a vacuum, and deposit the ejected particles on a substrate. 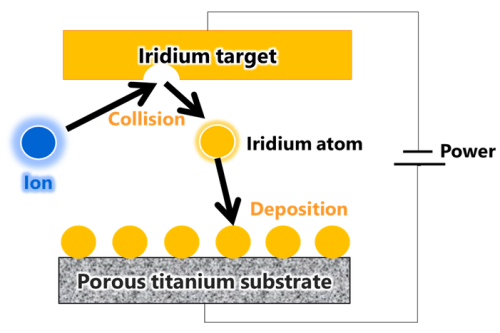 In Toshiba’s process, iridium is the target, and a thin film of iridium oxide is formed by injecting oxygen as the target is deposited on the substrate. Thickness control is at the nanometer level, realizing deposition of uniform iridium oxide layers of with a smaller amount of iridium.

Structures of Oxide Nanosheet and MEA developed by Toshiba

Using Toshiba’s laminated nanosheet structure in the catalyst layer successfully reduces the required iridium to 1/10, while maintaining the water electrolysis performance. It also significantly expands the deposition surface area. As sputtering is conducted in a vacuum, deposition on a large area is difficult. 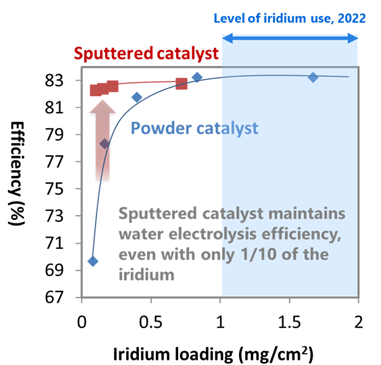 Comparative efficiency of powdered and sputtered catalysts, by iridium load

However, by modifying the deposition distribution ratio for multiple metal targets, including iridium, and the oxygen input level, Toshiba has successfully developed a large-scale production technology that realizes catalyst deposition on an area of up to 5m2 at a time.

In collaboration with Toshiba Energy Systems & Solutions Corporation, Toshiba has built MEA prototypes with electrodes based on the developed technology, and has begun evaluation testing with a water electrolyzer manufacturer. Going forward, the Company will improve the yield and quality toward mass production of MEA, aiming for commercialization in FY2023 or after.