Nel Hydrogen Electrolyser AS, a subsidiary of Nel ASA, has entered into a contract for alkaline electrolyzer equipment from Australia-based Woodside Energy for its proposed hydrogen project, H2OK, in Ardmore in the state of Oklahoma. The contract has a total value of about NOK 600 million (US$57 million).

This is a firm purchase order for alkaline stacks, balance of stack (BoS) equipment and engineering for the balance of plant (BoP) equipment (which Woodside will provide). There are pass-through mechanisms for steel and nickel price increases. Woodside aims to proceed with FID in 2023. Production of electrodes is estimated throughout 2024.

The electrolyzer stacks will be manufactured in Nel’s factory at Herøya, the world’s only fully automated electrolyzer facility.

H2OK—Woodside’s first hydrogen project in the US—is a liquid hydrogen production facility proposed for the Westport Industrial Park in Ardmore. Phase 1 involves construction of an initial 290-megawatt (MW) facility, producing up to 90 tonnes per day (tpd) of liquid hydrogen through electrolysis, targeting the heavy transport sector. The location offers the capacity for expansion up to 550 MW and 180 tpd.

The Nel equipment will support phase 1.

Woodside intends for H2OK to be a net-zero project. Power will be sourced from Oklahoma’s existing network, a large portion of which is wind-powered, and Renewable Energy Certificates will be used to abate any remaining emissions. 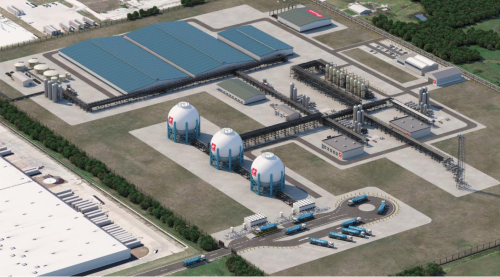 Woodside Energy is looking to expand its US footprint and is also working on two proposed hydrogen projects in Australia: H2Perth and H2Tas.

The contract with Woodside was signed only a couple of months after Nel received its record size 200 MW purchase order for another large-scale project in the US.