Home About Contact RSS GCC Twitter Newsletter
BMW Group to invest $1.7B in S Carolina to build EVs and batteries; partnering with Envision AESC
DOE awarding $1.16B to 9 battery component manufacturing projects as part of $2.8B funding

DOE awarding $2.8B to 21 projects to boost minerals output for batteries

The US Department of Energy (DOE) will award a combined $2.8 billion to 20 companies for 21 projects—the first set of projects funded by the Infrastructure Investment and Jobs Act (IIJA) to expand domestic manufacturing of batteries for electric vehicles (EVs) and the electrical grid and for materials and components currently imported from other countries. (DE-FOA-0002678, earlier post.)

The companies will build and expand commercial-scale facilities in 12 states to extract and process lithium, graphite and other battery materials; manufacture components; and demonstrate new approaches, including manufacturing components from recycled materials. The Federal investment will be matched by some $6.2 billion from the recipients to leverage a total of more than $9 billion.

According to the DOE, the funding for the selected projects will support:

Ascend also has the largest amount awarded to a single company ($481 million) with the addition of its second project ($164 million) to plan, design, and construct a cathode active materials (CAM) plant at a greenfield site in Hopkinsville, Kentucky, and install all manufacturing equipment. 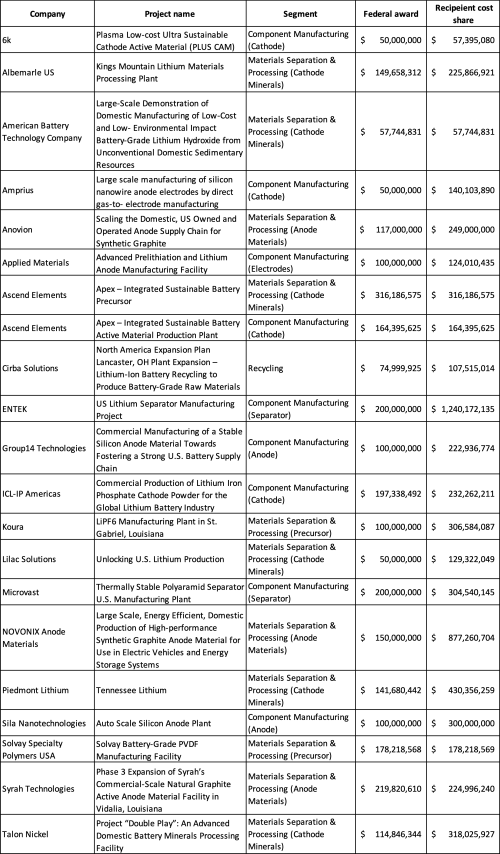 The funding marks the first phase of $7 billion in total provided by the IIJA to strengthen the domestic battery supply chain by supporting upstream materials processing to create the precursor materials for batteries. DOE anticipates moving quickly on additional funding opportunities to continue to fill gaps in and strengthen the domestic battery supply chain.

DOE’s Office of Manufacturing and Energy Supply Chains (MESC) will manage the portfolio of projects with support from DOE’s Office of Energy Efficiency and Renewable Energy’s Vehicle Technologies Office.