DOE awarding $1.6B to 11 battery materials separation and processing projects as part of $2.8B funding 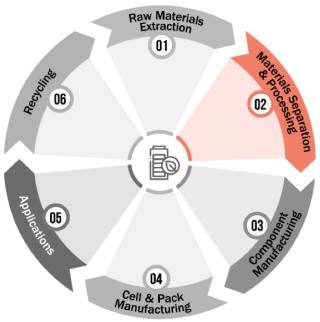 The US Department of Energy (DOE) is awarding a combined $2.8 billion to 21 projects to expand domestic manufacturing of batteries for electric vehicles (EVs) and the electrical grid and for materials and components currently imported from other countries. (Earlier post.) Of that, $1.6 billion will go to 11 projects in the materials separation and processing segment of the supply chain. The awardees are:

This US-owned and operated manufacturing plant in northern Alabama will be the first of its size in North America. Anovion’s selected site has critical infrastructure in place that will allow for an accelerated timeline for the construction of the facility. This project will expand Anovion’s existing manufacturing capacity in Sanborn, NY—notably the only qualified US source of battery-grade synthetic graphite commercially shipping product today.

Construction of a new 11,250 metric tons per annum (tpa) AAM facility is underway, with start of production scheduled for the third quarter of 2023. This project (“Phase 3 Expansion”) will expand the production capacity of the Vidalia AAM facility from 11,250tpa to at least 45,000tpa AAM.

Upon start of production of the 11,250tpa facility, Syrah’s Vidalia facility will be the only vertically integrated and large-scale natural graphite AAM producer outside China and the first large-scale natural graphite AAM producer in the US. In 2026, US-based lithium-ion battery manufacturing capacity is forecast to be almost 600GWh, which is estimated to require over 500,000 tpa graphite-based AAM.

This investment would allow Albemarle to process 8,000 tons per day (2.7 million tons per annum) of spodumene ore through a plant designed to produce 1,150-1,200 tons per day (~350,000 tons per annum) of 5.5-6.0% Li2O spodumene concentrate. Such a plant would feed a 50,000 metric ton per year conversion plant to produce battery grade lithium hydroxide to support domestic manufacturing of the lithium-ion battery cells to power 750,000 electric vehicles per year. Albemarle is finalizing the site selection for the lithium hydroxide conversion plant in the southeastern United States.

ABTC has secured more than 10,000 acres of lithium-bearing sedimentary resources near Tonopah, NV, and its project team has been performing work under an existing grant award from the US Department of Energy’s Advanced Manufacturing Office (AMO) to demonstrate this process in an integrated multi-ton per day field demonstration system.

With the new grant award, a 5,000 MT (metric tonnes) LiOH/year commercial processing plant will be constructed and operated at this resource site, with the capacity of the facility to subsequently be expanded to 30,000 MT LiOH/year.

Ascend Elements will plan, design, and build Apex 1 on an existing greenfield site in Hopkinsville, a disadvantaged community (DAC) in southwestern Kentucky. This facility will consist of multiple manufacturing buildings, office space and a warehouse, as well as support infrastructure including a rail spur, unloading/loading stations and holding tanks. The construction process will use established and approved processes for building new manufacturing sites.

Lilac Solutions, Unlocking US Lithium Production, $50,000,000. Lilac’s project in Fernley, Nevada, will demonstrate the production of lithium at commercially relevant scales (TRL 9) using the company’s IX lithium extraction technology. The technology to be demonstrated has the potential to unlock lithium production from domestic resources that are unviable with current production technologies, and thereby vastly expand domestic lithium supply.

Most of the world’s lithium resources are found in naturally occurring salt solutions, known as brines. However, most domestic brine resources contain lithium at concentrations too low, and impurities at concentrations too high, to make extraction commercially viable. Lilac’s patented ion-exchange technology can extract lithium economically from these brines by directly capturing the lithium using solid ion-exchange beads, while impurities remain within the liquid resource and are returned to the natural environment.

Piedmont Lithium, Tennessee Lithium, $141,680,442. Piedmont is designing Tennessee Lithium to be a world-class lithium hydroxide facility and a large, low-cost contributor to the battery manufacturing supply chain with a sustainability footprint that is superior to incumbent producers.

Located in McMinn County, Tennessee, the project will be sited in an ideal location and uniquely positioned to supply America’s rapidly growing electric vehicle market. At full production, the Tennessee Lithium is expected to produce 30,000 metric tons per year of lithium hydroxide for the domestic battery and EV market, doubling the lithium hydroxide production capacity currently available in the United States.

Construction is expected to begin in 2023, subject to permitting and project financing, with first production targeted for 2025.

Currently, there are no large-scale domestic producers of LiPF6 and all of it comes from Asian imports. Furthermore, the material degrades over time and is costly to import to the US. As a result, lack of domestic manufacturing represents a critical risk in the supply chain for lithium-ion battery production in the US.

As part of the fluorinated solutions business group of Orbia, a publicly traded global corporation with total revenues of $8.7 billion in 2021, Koura employs a Mine-to-Market capability to produce and distribute its fluorochemical products globally and it owns a vertically integrated North American supply of fluorine, the primary component of LiPF6. Koura’s proposed plant will produce up to 10,000MT of LiPF6 per year, which is sufficient to support domestic production of more than a million full electric vehicles (EVs) annually.

Furthermore, Koura’s LiPF6 plant will have a secure access to critical minerals and downstream processing to establish domestic production of LiPF6. It will also utilize vertical integration, recycling, and state-of-the-art manufacturing to achieve production economics that will be competitive with foreign imports.

Solvay’s next-generation PVDF is being used by nearly all EV battery suppliers. PVDF enables EV batteries to go farther on charge, contributes to cycle life, and enhances battery durability. The planned project, which still requires approval from the Solvay Board of Directors, has the potential to provide enough PVDF to supply more than 5 million EV batteries per year at full capacity.