New research from Chalmers University of Technology, Sweden, finds that the discharge water from ships’ exhaust gas treatment systems—i.e., scrubbers—is responsible for up to 9% of certain emissions of carcinogenic and environmentally harmful substances in the Baltic Sea—considerably more than was previously known. Furthermore, the number of ships equipped with scrubbers have tripled since the study was carried out.

The Baltic Sea is one of the most polluted sea areas in the world due to the northerly geographic location, natural hydrographic properties, large catchment area and the semi-enclosed character of the brackish inland sea. 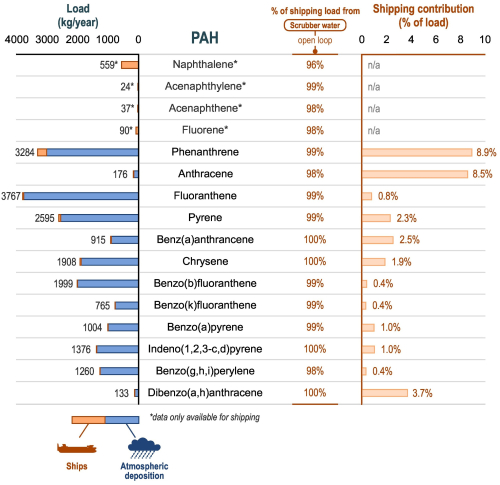 The researchers’ study was commissioned by the Swedish Transport Agency and the Swedish Agency for Marine and Water Management to investigate the environmental impact from scrubbers in the Baltic Sea, compared to other sources of environmental contaminants.

For many years, we’ve flagged the fact that scrubbers account for disproportionately large emissions of hazardous and acidifying substances into the marine environment. In spite of this message, we have seen a significant increase in the number of scrubber installations as it is economically beneficial for the shipowner. Therefore, it is very important that authorities and decision-makers now react and implement measures to reduce shipping’s emissions and impact on the marine environment.

—Ida-Maja Hassellöv, Professor and researcher at the Division of Maritime Studies at Chalmers

A scrubber is used on ships to clean exhaust gases, primarily to reduce emissions of sulfur oxides to the atmosphere. However, washing the exhaust gases in seawater trap other contaminants in the seawater and results in the release of hazardous substances to the marine environment.

In the Chalmers study, published as an open-access paper in the Marine Pollution Bulletin, the researchers found that more than 200 million cubic meters of environmentally hazardous scrubber water were discharged from ships that used exhaust gas cleaning systems in the Baltic Sea in just one year.

The study showed that scrubber wash water accounts for up to 9% of the emissions of certain cancer-causing polycyclic aromatic hydrocarbons (PAHs) into the Baltic Sea. The study also revealed that ships painted with copper-based antifouling paints account for a third of the total supply of copper to the Baltic Sea.

Copper. Copper in antifouling paints is already a known environmental problem as the metal cannot be degraded in the environment and therefore leads to high levels in water, sediment, and soil. But exactly how much of the load of copper boat and ship traffic accounts for, has previously been unknown. Also, the cancer-causing PAHs are difficult to degrade and can spread widely in the environment before breaking down.

Our results show that shipping accounts for a significant proportion of hazardous substances to the Baltic Sea, above all through antifouling paints and discharge of wash water from open loop scrubbers. PAHs are highly toxic to both humans and aquatic organisms as they are, among other things, carcinogenic. Worth noting is that the study’s data was collected in 2018, and at that time there were approximately 180 ships with scrubbers in the Baltic Sea. Since then, these ships have increased significantly and in 2021 there were almost 600 ships equipped with scrubbers in the Baltic Sea.

—lead author Erik Ytreberg, Associate Professor and researcher at the Division of Maritime Studies at Chalmers

The new research results have led the Swedish Transport Agency and the Swedish Agency for Marine and Water Management to propose a ban on the discharge of scrubber water into the internal waters of the Baltic Sea. If the Swedish politicians follow the line of the researchers and the authorities, Sweden will be the first country in the Nordic region to introduce the ban.

Scrubbers are currently installed on more than 4,000 ships around the world. In the Baltic Sea area, only Germany already applies the same legislation, even though several other countries in Europe regulate scrubber discharges in their ports. The Chalmers researchers welcome the proposal but hope for even more extensive regulation in the future.

The proposal that Sweden should ban the discharge of wash water into Swedish inland waters is good, but at the same time it means that only 1–2 percent of the discharges that occur from scrubbers in the Baltic Sea today will be regulated. Sweden could also propose a ban in our territorial waters, which would mean that roughly 15–17 percent of emissions to the Baltic Sea could be regulated. But the biggest effect would obviously come from an international ban, where all the countries around the Baltic Sea agree on a joint regulation of the discharge of scrubber water.

You can bet there are a lot of sins committed by fossil fuel users and providers that remain undiscovered. e.g., you wonder how long drillers have been flaring before it came to the attention of the EPA; I'm sure the Saudis continue the practice b/c they have no EPA. And, the Russians? who I suspect don't give a s..t(shoot)!