According to Bosch studies, more than half a million construction machines in the performance class from 56 to 560 kilowatts will be produced across the world in 2022. With further growth predicted for this market in the coming years, the Bosch powertrain division expects to play an equally important role in these developments.

Hydrogen engines are based on established, tried-and-tested engine technology, which is adapted to ensure a sustainable future, Bosch says. When driven by green hydrogen, these powertrains are virtually climate-neutral.

In addition, the powertrain concept represents an effective complement to fuel cell technology since it requires the same vehicle storage systems and an identical infrastructure.

Bosch says it is working on hydrogen engine systems with port fuel and direct injection and is already involved in more than 100 technical trials with customers across the world. Moreover, the company has already landed its first volume production project in India.

Construction machinery is frequently used in stationary, high-load applications, and this is the exact environment in which hydrogen engines can shine with their high efficiency and robustness. But the powertrain solution will also be used for agricultural machinery and in long-haul transport.

In addition, the hydrogen engine represents a very promising option in the large-engine sector, for example, as a powertrain for dump trucks in the mining industry. This is another area in which robustness and reliability combined with a compact design are crucial to efficient operation. 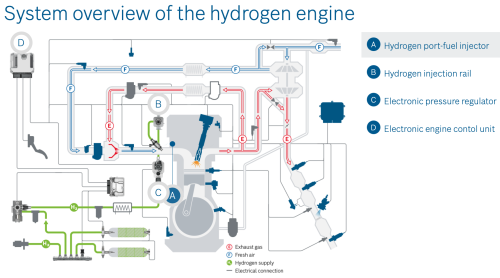 Along with the direct injection of hydrogen, the new AFI-LP (alternative fuel injector – low pressure) injector from Bosch also allows the use of other fuels, such as methanol, both for port fuel and direct injection. Engine manufacturers can thus benefit from maximum flexibility.

eLION electrification platform. Bosch Rexroth offers an electric powertrain solution for mobile construction machinery in the form of eLION. The product platform is designed specifically for the off-highway sector and its demanding environmental conditions. It is highly scalable, extremely robust, and offers comprehensive functional safety according to ISO 13849.

The high-voltage eLION electric motors (up to 850 volts) cover a nominal power range of 20 to 230 kilowatts (with peak outputs in excess of 550 kilowatts) and generate nominal torques of up to 1,300 N·m as well as maximum torques of more than 2,500 N·m. Available in four different sizes, they are equally well suited to compact and heavy-duty mobile machinery and can be used for both travel and work functions. Initial pilot projects with customers have been underway since 2021.

Bosch is also presenting at bauma the SMG180 and SMG220 electric motors as well as the INVCON 3.3 inverter with its integrated DC/DC converter. These components were developed for use in light commercial vehicles and are also certified for off-highway applications.

https://www.thetimes.co.uk/article/shell-shuts-hydrogen-car-fuel-stops-as-the-low-carbon-technology-stalls-t7hrpm2nw
Looks as though at least one got smart!

There's a place for H2; nowever, it's not in ground transportation. Airliners, sea ships and unique applications where flexibility and a clean fuel is a requirement.