Researchers in Germany have developed a method to store and release highly pure hydrogen by the interconversion of readily available (bi)carbonate and formate salts in the presence of naturally occurring α-amino acids. An open-access paper on their work is published in ACS Central Science. 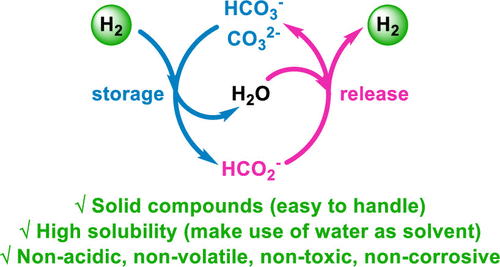 The reversible storage of hydrogen in solid salts has emerged as a potential way to make the fuel easier to transport and handle, but the reactions to do this require precious metals as catalysts and may produce carbon dioxide as an unwanted byproduct.

The researchers found that converting bicarbonate and hydrogen into formate, and vice versa, was most effective with potassium salts, a manganese-based catalyst and lysine—an amino acid that acted as an additional promoter and reacted with carbon dioxide to capture it—at reaction temperatures below 200 F.

After five storage-release cycles, the reaction system produced hydrogen with a high yield (80%) and purity (99%). The team also showed that carbonate salts and glutamic acid can be part of the reusable storage-release system with hydrogen yields up to 94%. This technique paves the way for large-scale hydrogen storage in solids, the researchers said.

The authors acknowledge funding from the State of Mecklenburg-Vorpommern and European Union, the Leibniz-Program Cooperative Excellence K308/2020 (project “SUPREME”) and the European CO2PERATE project.