Researchers from Osaka University have demonstrated a proof-of-concept for a novel molecular hydrogen production method that bypasses the need for expensive purification steps. They developed a system where hydrogen is separated and stored in liquid organic hydrogen carriers by catalysis of triaryl boranes in one seamless process. An open-access paper on their work is published in Science Advances.

The concept of this work. Direct use of crude hydrogen gas for catalytic hydrogenation of unsaturated molecules. Credit: Y Hoshimoto

In the midterm future, a huge amount of H2 will be produced from a variety of hydrocarbon sources through conversion and removal of contaminants such as CO and CO2. However, bypassing these purification processes is desirable, given their energy consumption and environmental impact, which ultimately increases the cost of H2.

Here, we demonstrate a strategy to separate H2 from a gaseous mixture of H2/CO/CO2/CH4 that can include an excess of CO and CO2 relative to H2 and simultaneously store it in N-heterocyclic compounds that act as liquid organic hydrogen carriers (LOHCs), which can be applied to produce H2 by subsequent dehydrogenation.

Our results demonstrate that LOHCs can potentially be used for H2 purification from CO- and CO2-rich crude H2 in addition to their well-established use in H2 storage. 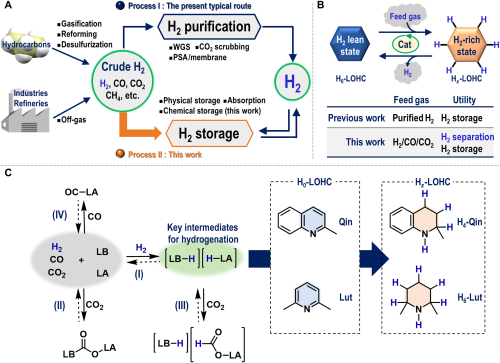 Research background and concept of this study. (A) Simplified schemes of representative contemporary routes of H2 purification followed by H2 storage (process I) and a conceptually novel route involving the simultaneous separation and storage of H2 from crude H2 (process II); WGS, water-gas shift; PSA, pressure swing adsorption. (B) Schematic illustration of the general concept behind LOHCs and the critical differences between well-established methods and this work. (C) Potential reactions among H2, CO, CO2, LA (Lewis acid/acidic part), and/or LB (Lewis base/basic part). Dashed arrows represent backward reactions that do not always occur under the same conditions as the corresponding forward reaction. Hashimoto et al.

The difficulty of extracting hydrogen from common contaminant gases has restricted the utility of liquid organic hydrogen carriers for hydrogen storage. In these systems, many researchers have struggled to overcome the challenge of inducing the carriers to uptake—i.e., store—hydrogen in the presence of contaminant gases. Even a small amount of carbon monoxide can hinder hydrogen uptake, says Yoichi Hoshimoto, the corresponding author. Thus, he explained, costly purification methods to isolate the hydrogen prior to storage are necessary.

To overcome these challenges, Hoshimoto and his team have synthesized shelf-stable triaryl boranes that took up hydrogen even in the presence of common contaminant gases, achieving the following results: hydrogen storage (with up to >99% efficiency) and subsequent hydrogen release at a purity of up to 99.9%. Hydrogen purification based on the borane-catalyzed hydrogenation of 2-methylquinoline under mixed-gas conditions and subsequent catalytic dehydrogenation. Credit: Y. Hoshimoto

The industrial value of molecular hydrogen has long been plagued by substantial quantities of carbon monoxide and other contaminants. However, in the catalytic hydrogenation method we developed, even a five-fold excess of a contaminant wasn’t a problem, and hydrogen uptake and release were each achieved without using any solvents.