NASA’s Earth Surface Mineral Dust Source Investigation (EMIT) mission is mapping the prevalence of key minerals in the planet’s dust-producing deserts—information that will advance our understanding of airborne dust’s effects on climate. But EMIT has demonstrated another capability: detecting the presence of methane, a potent greenhouse gas.

In the data EMIT has collected since being installed on the International Space Station in July, the science team has identified more than 50 “super-emitters” in Central Asia, the Middle East, and the Southwestern United States. Super-emitters are facilities, equipment, and other infrastructure, typically in the fossil-fuel, waste, or agriculture sectors, that emit methane at high rates. 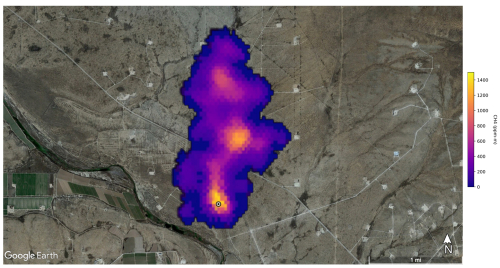 The cube (left) shows methane plumes (purple, orange, yellow) over Turkmenistan. The rainbow colors are the spectral fingerprints from corresponding spots in the front image. The blue line in the graph (right) shows the methane fingerprint EMIT detected; the red line is the expected fingerprint based on an atmospheric simulation. Credit: NASA/JPL-Caltech

The new observations stem from the broad coverage of the planet afforded by the space station’s orbit, as well as from EMIT’s ability to scan swaths of Earth’s surface dozens of miles wide while resolving areas as small as a soccer field.

These results are exceptional, and they demonstrate the value of pairing global-scale perspective with the resolution required to identify methane point sources, down to the facility scale. It’s a unique capability that will raise the bar on efforts to attribute methane sources and mitigate emissions from human activities.

Relative to carbon dioxide, methane makes up a fraction of human-caused greenhouse-gas emissions, but it’s estimated to be 80 times more effective, ton for ton, at trapping heat in the atmosphere in the 20 years after release. Moreover, where carbon dioxide lingers for centuries, methane persists for about a decade, meaning that if emissions are reduced, the atmosphere will respond in a similar timeframe, leading to slower near-term warming.

Identifying methane point sources can be a key step in the process. With knowledge of the locations of big emitters, operators of facilities, equipment, and infrastructure giving off the gas can quickly act to limit emissions.

EMIT’s methane observations came as scientists verified the accuracy of the imaging spectrometer’s mineral data. Over its mission, EMIT will collect measurements of surface minerals in arid regions of Africa, Asia, North and South America, and Australia. The data will help researchers better understand airborne dust particles’ role in heating and cooling Earth’s atmosphere and surface.

The mission’s study area coincides with known methane hotspots around the world, enabling researchers to look for the gas in those regions to test the capability of the imaging spectrometer.

Some of the plumes EMIT detected are among the largest ever seen—unlike anything that has ever been observed from space. What we’ve found in a just a short time already exceeds our expectations.

For example, the instrument detected a plume about 2 miles (3.3 kilometers) long southeast of Carlsbad, New Mexico, in the Permian Basin. One of the largest oilfields in the world, the Permian spans parts of southeastern New Mexico and western Texas.

In Turkmenistan, EMIT identified 12 plumes from oil and gas infrastructure east of the Caspian Sea port city of Hazar. Blowing to the west, some plumes stretch more than 20 miles (32 kilometers).

The team also identified a methane plume south of Tehran, Iran, at least 3 miles (4.8 kilometers) long, from a major waste-processing complex. Methane is a byproduct of decomposition, and landfills can be a major source. 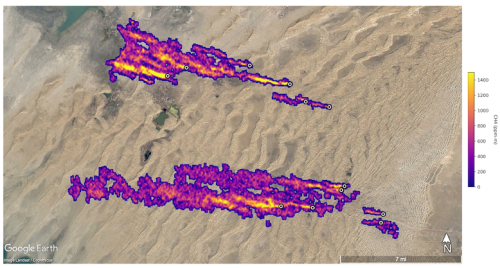 East of Hazar, Turkmenistan, a port city on the Caspian Sea, 12 plumes of methane stream westward. The plumes were detected by NASA’s Earth Surface Mineral Dust Source Investigation mission and some of them stretch for more than 20 miles (32 kilometers) Credit: NASA/JPL-Caltech

The Turkmenistan sources together have a similar flow rate to the 2015 Aliso Canyon gas leak, which exceeded 110,000 pounds (50,000 kilograms) per hour at times. The Los Angeles-area disaster was among the largest methane releases in US history.

With wide, repeated coverage from its vantage point on the space station, EMIT will potentially find hundreds of super-emitters—some of them previously spotted through air-, space-, or ground-based measurement, and others that were unknown.

EMIT is the first of a new class of spaceborne imaging spectrometers to study Earth. One example is Carbon Plume Mapper (CPM), an instrument in development at JPL that’s designed to detect methane and carbon dioxide. JPL is working with a nonprofit, Carbon Mapper, along with other partners, to launch two satellites equipped with CPM in late 2023.

EMIT was selected from the Earth Venture Instrument-4 solicitation under the Earth Science Division of NASA Science Mission Directorate and was developed at NASA’s Jet Propulsion Laboratory, which is managed for the agency by Caltech in Pasadena, California. 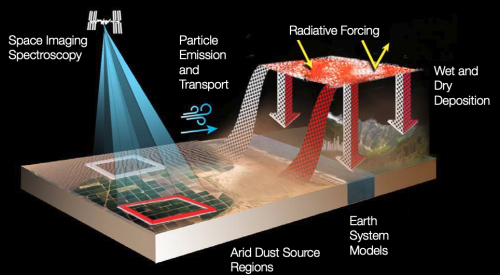 It launched aboard a SpaceX Dragon resupply spacecraft from NASA’s Kennedy Space Center in Florida on 14 July 2022. The instrument’s data will be delivered to the NASA Land Processes Distributed Active Archive Center (DAAC) for use by other researchers and the public.