LiquidPiston announced a $9-million award from the US Army to design, build and demonstrate an advanced, heavy-fueled combustion engine that uses up to 30% less fuel than comparable gasoline-powered engines in the same power class and reduces size and weight by up to 10x over diesel engines with comparable power output.

The engine will be optimized for Jet A, JP8 and F24 fuels, and will be capable of integrating within hybrid electric propulsion systems and generators.

The current UAS engines are not designed for military fuels. This causes performance and reliability issues with the component technologies. DEVCOM ARL’s Versatile Tactical Power and Propulsion Essential Research Program has partnered with industry, academia and other government organizations in the development of technologies to address this void. By engaging with combustion engine innovators like LiquidPiston, ARL is demonstrating our commitment to modernizing the US Army’s power and propulsion systems to support our Warfighters with unmatched capabilities.

Heavy-fuel-capable engines in the power class required for small to medium UAS propulsion are not provided by current small piston engine manufacturers. Currently-available engines are designed for gasoline, aviation gasoline (or Avgas) and other “light” fuels which necessitate a second fuel supply chain for the US military, with the associated extra costs and risks to personnel.

Additionally, most UAS engines are not manufactured domestically in the US, presenting potential supply chain issues, and suffer from inadequate performance, suboptimal reliability, and increased life-cycle costs.

To address these challenges, LiquidPiston has kicked off a project to support the development of a new, compact, heavy-fuel-capable engine and power system for use in future UAS and generators. These efforts support the needs of the Army’s Future Vertical Lift, Next Generation Combat Vehicle, and Soldier Lethality Modernization Priorities.

This ARL award will help us progress the technology readiness of our X-Engine, topping off the work of over 15 years of R&D and more than 70 patents. 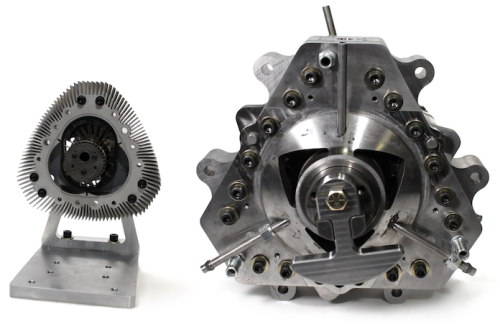 The result is a purpose-designed power source for auxiliary and hybrid-electric propulsion platforms where portability, efficiency, low maintenance and jet fuel compatibility all work to overcome current range and payload shortcomings.

A tiny cheeep car with this engine running on natural gas/hydrogen in a range extender config would be a wonderful thing. Its so small it could pop in and out with a 'cassette' format. If it only lasts 50,000 miles it can just be replaced. There is no weight penalty and no space penalty.
Mazda, are you listening? MX-30 REx

No, it's more useful for hybrid motorcycles, or aviation.