PLASMAfusion uses a pulsed electron beam in a mid-range vacuum to ablate a solid-state target containing the source material(s). Unlike the typical channel-spark discharge deposition, which is limited by the short lifetime of the cathode, PLASMAfusion deploys a virtual plasma cathode which is generated prior to each pulse of the electron beam. 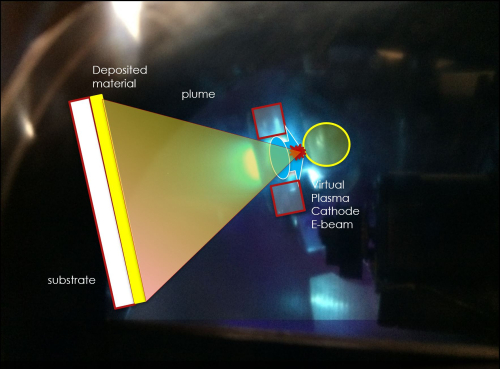 Each PLASMAfusion pulse begins with a generation of plasma through ionization of the operation gas. The electron beam ablates the target and then the plasma cathode decays, leaving a space for ablated target material in the form of a plasma plume to propagate toward a substrate, where it forms a film. Repetition of the pulse at a rate in the range of 1–600 Hz allows a film to grow on the substrate with controlled growth rate and properties.

The film-based products will reduce battery weight and cost, improve energy efficiency, extend vehicle range, and enhance safety against the risk of battery fires (known as thermal runaway) compared to standard Li-Ion batteries for electric vehicles and other use cases.

The MOU is focused on developing battery materials, such as coated copper current collectors and solid-state battery electrodes, as a multi-year project in several stages: a pilot-scale roll-to-roll system, to be followed by an industrial scale mass production line, and further development of the application to the production of solid-state batteries.

“We are confident that our thin polyester film manufacturing technology, coupled with our fundamental knowledge in polyester material science, will help deliver a solution to the lithium-ion battery market to improve safety and performance,” said Dave Wall, Global Technology and Market Development Leader for DuPont Teijin Films. “This collaboration with Meta Materials and Mitsubishi Electric is a perfect example of how DuPont Teijin Films innovates alongside talented partners to meet global challenges.”

According to an S&P Global Future of Copper report, the world may face a shortfall of between 1.6 and 9.9 million tons of copper by 2035. Even under an optimistic scenario, supply would not meet the copper demand required for net-zero emissions by 2050. An EV requires 2.5 times more copper than an ICE vehicle and the forecasted supply shortage needs a better solution than more mining. Current collectors used on the cathode and anode are made from aluminum and copper foils, respectively, and together contribute about 15% of the weight of the battery cell; the heavier copper material accounts more than 10%.

META’s PLASMAfusion technology has already been demonstrated in a project funded by the UK Research and Innovation Faraday Battery Challenge. Thin layers of copper are deposited on both sides of a polyester substrate, reducing the weight of the current collector by up to 80%. Lighter weight increases energy density, extending vehicle range. The polyester inner layer acts like a fuse, helping to inhibit thermal runaway. This new battery technology can reduce the dependence on copper that is needed for the other parts of electric vehicles. With copper consumption in electric vehicles predicted to increase to 4 million tons annually by 2040, this innovation could save millions of tons of copper.

The improved energy density of these batteries is expected to not only increase the range of electric vehicles but also make electric aviation more feasible, as well as improve portable electronics and power tools.