Solaris won a tender held by public transport operator Miejskie Przedsiębiorstwo Komunikacyjne (MPK) in Cracow for the delivery of electric buses. At the end of October the carrier signed a contract with the manufacturer for the delivery of 18 articulated electric vehicles. The contract is worth more than PLN 98 million (US$20.6 million). The contract includes an option to order an additional three Urbino 18 electric units. 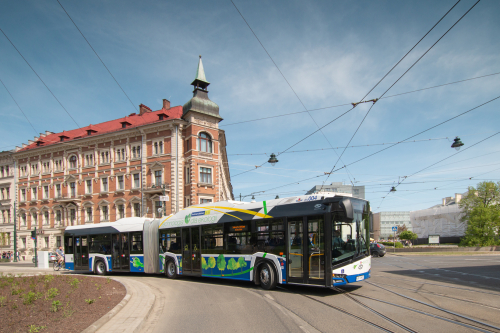 The e-buses chosen by MPK in Cracow will be adapted for both charging using a plug-in connector and pantograph charging. The energy storage system will consist of Solaris High Energy batteries with a capacity of more than 400 kWh. To boost the buses’ efficiency and to reduce energy consumption even further, the propulsion system will employ innovative SiC technology, using silicon carbide-based circuits.

The buses will feature a 2-2-2-2 door layout and will be able to carry 141 passengers, including 43 seated. The buses will boast an efficient air conditioning system, a comprehensive passenger information system, a video surveillance system and USB ports for charging smartphones. All systems and devices installed in the bus, including heating, will be powered solely by electricity.

Currently, the city’s fleet boasts 76 e-buses manufactured by Solaris. All in all, Cracow will soon boast an impressive fleet of 114 Urbino electric vehicles.

It was Cracow where the launch of the new hydrogen-fueled model, Urbino 18 hydrogen, took place in September. MPK Kraków has been testing the 12-meter hydrogen-powered Solaris bus within its network since June.