DG Fuels (DGF), a provider of cellulosic drop-in sustainable aviation fuel (SAF), signed a multi-year SAF offtake agreement with Air France KLM for up to 60,408 metric tons (21 million gallons) per year from DGF’s initial plant to be located in Louisiana.

The contract is expected to make Air France KLM DGF’s largest European airline customer and lays the groundwork for expansion of this commercial relationship as DGF scales up production at the Louisiana and additional planned SAF production plants to be located in the United States and beyond.

The minimum 10-year deal will reduce lifecycle emissions by up to 340,647 metric tons of carbon dioxide per year, beginning with the first expected SAF deliveries in 2026.

In total, the definitive offtake agreement covers up to 604,086 metric tons (210 million gallons) of SAF, resulting in life cycle emission reduction of up to 3,406,470 metric tons over the initial term of the agreement. 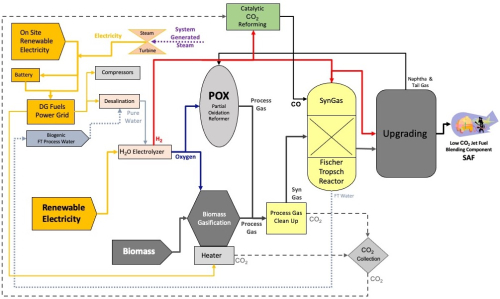 The feed-stock reduction is achieved primarily by supplementing the process with oxygen and hydrogen produced by water electrolysis units that are powered by clean wind and solar generated electricity. DGF replaces the coal gasification used by others with biomass gasification and natural gas reforming. This simplifies implementation and further reduces new carbon emissions created in the process.

DGF’s patented system design is expected to have a carbon intensity (CI) score of -39 grams per megajoule—140% lower than conventional Jet A. DGF’s SAF formula also has a higher energy density than conventional Jet A, providing airline customers with operational advantages in addition to the environmental benefits.

With this agreement Air France and KLM now join DGF’s three other disclosed and undisclosed launch customers under binding agreements totaling over 130 million gallons per year.

The project is being undertaken by bio-fuels industry leader Black & Veatch, which is performing feasibility, early engineering, and environmental permitting work as well as engineering, procurement and construction (EPC) execution.

They should use gold hydrogen instead of costly hydrogen made by water electrolisis. I won't buy a ticket if the fuel is ain't cheap.