The European Commission presented its proposal for Euro 7 standards to reduce air pollution from new motor vehicles sold in the EU. While CO2 emission rules will drive the deployment of zero-emission vehicles, it is important to ensure that all vehicles on European roads are much cleaner, the EC said.

In 2035, all cars and vans sold in the EU are to have zero CO2 emissions. However, in 2050, more than 20% of cars and vans and more than half of the heavier vehicles are expected to continue to emit pollutants from the tailpipe. Battery electric vehicles also still cause pollution from brakes and microplastics from tires. Euro 7 rules will reduce all these emissions and keep vehicles affordable to consumers, the EC said.

The Euro 7 proposal replaces and simplifies previously separate emission rules for cars and vans (Euro 6) and trucks and buses (Euro VI). The Euro 7 standards rules bring emission limits for all motor vehicles, i.e., cars, vans, buses and lorries under a single set of rules. The new rules are fuel- and technology-neutral, placing the same limits regardless of whether the vehicle uses gasoline, diesel, electric drive-trains or alternative fuels. They will help to:

The Commission’s proposal will be submitted to the European Parliament and the Council in view of its adoption by the co-legislators. 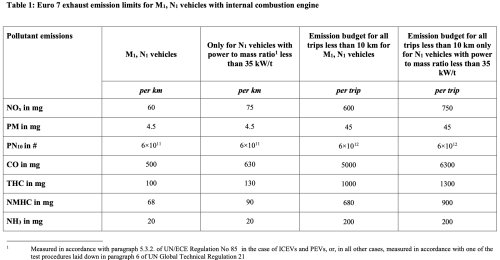 In 2035, Euro 7 will lower total NOx emissions from cars and vans by 35% compared to Euro 6, and by 56% compared to Euro VI from buses and trucks. At the same time, particles from the tailpipe will be lowered by 13% from cars and vans, and 39% from buses and lorries, while particles from the brakes of a car will be lowered by 27%.

Following the Dieselgate scandal, the Commission has introduced new tests to measure emissions on the road (the RDE method) and increased the market surveillance powers of Member States and the Commission, in order to ensure that vehicles are as clean as expected by the Euro 6 norms.

European environmental NGO Transport & Environment (T&E) called the Euro 7 proposal “shockingly weak” and said it is now critical that the European Parliament strengthens these standards or simply rejects them.

Very important, that. Non-exhaust emissions are now by FAR the largest source of pollutants.

Not GHG, of course.

But fat, heavy, and massively accelerating is the opposite of the way we need to go.

Seems like over-kill.
How many people per year are we really saving here? 5?, 100s?, 10,000s?
And how many life-years per person are we really conserving here 0.1?, 1? 10?
Are the alleged illnesses/ conditions really the direct and primary result of these emissions/ products and not a minor, co-contributor also from poor health decisions of the populace?
A risk-free, pollutant-free, and carbon-free world is not as desirable as people think. It often comes at significant cost in future technology paused or halted, personal and societal wealth and/or experience foregone, bureaucratic and private sector regulatory excesses in time and cost, personal and company liberties and choice control diminished or restricted, etc., etc.
There is reasonable mitigation of clear and present threats -and- then there are the idle wishlists and personal agendas of enviro-anarchists and self-righteous government departments with far too much time and money on their hands, searching for purpose and attention. We need to quantify real threats, not constantly chase an always moving target of bleeding-heart liberal pet causes with minimal, quantifiable, scientific basis.

?? Suck up those particulates, they are nothing to worry about! Just like lead in petrol, really.....

"The fundamental trends that drive this ratio are: tailpipe particulate emissions are much lower on new cars, and tire wear emissions increase with vehicle mass and aggressiveness of driving style," according to Emissions Analytics.

That doesn't bode well for larger EV battery packs, which contribute a significant amount of weight. Half a metric ton of battery weight can cause tire emissions 400 times greater than real-world tailpipe emissions, everything else being equal," Emissions Analytics concluded.'

As the link indicates, tire wear is also a major source of microplastics pollution.

@Jer:
"How many people per year are we really saving here? 5?, 100s?, 10,000s?"
If you intentionally take someone else's life, you'll be held responsible in court for murder. If it cannot be proven that it was intentional, the least you'll get is manslaughter. This may not be the case in Russia, or China etc. but certainly in the rest of the "civilized" world.
It is not only human life that matters but generally speaking it concerns all higher forms of life excluding needless lower life-forms e. g. viruses or bacteria that make life difficult or impossible for all the rest.
It is certainly nothing for a human being to be proud of to behave like a worthless and needless microbe.