China continues to dominate BloombergNEF’s (BNEF) global lithium-ion battery supply chain ranking, for the third time in a row, for both 2022 and its projection for 2027, due to continued support for the electric vehicle demand and raw materials investments. 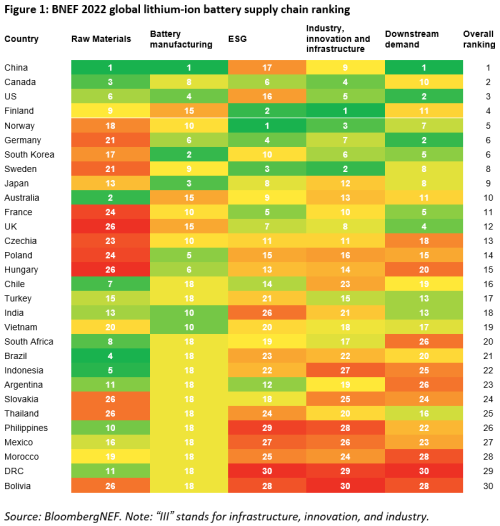 China currently hosts 75% of all battery cell manufacturing capacity and 90% of anode and electrolyte production. The increasing prices of lithium has also led to higher investments in carbonate and hydroxide refinery facilities in the country, making it the leading refiner of battery metals globally.

Despite this growth, other countries are enforcing policies to create battery demand and secure raw materials needed to support their transition to electric vehicles.

Published at the BNEF Summit Bali, the ranking sees Canada rise to the second spot this year, which reflects its large raw material resources and mining activity, as well as its good positioning in environmental, social and governance factors (ESG) and infrastructure, innovation, and industry.

A lack of significant cell and component manufacturing capacity means that most of the value of these resources is realized outside of the country, although recent announcements from companies such as BASF, General Motors and Posco show an increase in battery investments.

This year, the changes in the overall rankings were mostly driven by the greater access to several key raw materials and manufacturing capacities domestically. Countries that are not necessarily the largest producers or manufacturers but have significant presence across several areas in battery metals and minerals extraction, as well as manufacturing, fared better than countries that excel mostly in a single commodity or component. Success in the battery supply chain is increasingly determined by more than one category or metric. A solid foundation on domestically realized resource wealth, bolstered by responsible and ethical production, is the main theme of the rankings this year as countries and the industry strive for a sustainable supply chain.

The US dropped to third in the rankings despite the strong growth in battery demand due to the “Inflation Reduction Act”. The US placed in the top 10 for all categories except for ESG, where it ranked 16th. Strong battery demand for stationary storage and rapidly accelerating passenger vehicle sales (rising from 5% in 2022 to 34% by 2027) ensure that it places high on the leaderboard. Despite the US recording the biggest improvement among all countries in raw materials for 2022, it will still be reliant on raw material imports for batteries, especially from its free-trade partners, such as Australia.

The “Inflation Reduction Act” is a major upside for battery demand in the US but, more importantly, it will change the supply landscape in the coming years. The law is the closest thing to industrial policy for batteries that the US has ever had and makes this the most exciting decade yet for the American battery industry. Companies are looking to maximize battery cell, module and material production incentives and comply with electric-vehicle credit requirements, which will bring more capacity to the country and its allies.

Most European countries declined in their overall performance this year with Finland and Czechia being the only exceptions. Finland placed the highest in Europe and was ranked fourth in the overall rankings. The country’s growing battery metals supply chain, relatively clean grid and quality infrastructure favorably positions it among top lithium-ion battery countries.

Many European countries are successfully capitalizing on their supply chain potential but the trend of decline in the region this year indicates that growth in Europe is starting to be outpaced by North American and Asian countries. European countries such as Czechia, Hungary and Poland, continue to have advantages in their ability to provide cleaner and more sustainable supply chains. This will reinforce their growth ambitions and further their case as preferred destinations for investments in batteries manufacturing.

China, South Korea and Japan were the top three countries across all battery manufacturing metrics. They have historically had the most established manufacturing bases, with supportive industrial policies. US cell production capacity surpassed Japan in 2014 and South Korea in 2016. Most operational multi-gigawatt-hour cell manufacturing facilities in the world are owned by a Chinese, Japanese or Korean company (Tesla’s Nevada Gigafactory was jointly developed with Panasonic). In 2022, South Korea and Japan each announced domestic and overseas expansions of cell production capacity as well as supply chain strategies to secure key materials.

In BNEF’s 2027 rankings, countries in South America see the biggest declines, notably Brazil and Bolivia. Brazil remains a strong contender given its raw materials strength but dropped to 21st in the 2022 rankings due to poor performance in ESG. Bolivia was at the bottom of the rankings this year. It only performed well in 2021 in raw materials due to its massive lithium reserves.

Most resource-rich countries rank low in the overall score as they generally lack a domestic battery manufacturing capabilities and electric vehicle demand. Countries such as Indonesia, Chile, South Africa and the Democratic Republic of Congo are looking to reverse this trend by using their raw materials competitiveness as an advantage to attract downstream investment across the supply chain. Policy incentives to drive EV adoption, clean energy supply as well as industrial infrastructure will help these resource-rich countries to attract the downstream investment needed to build domestic lithium-ion battery supply chains.

In the report, BNEF ranks 30 leading countries across the lithium-ion battery supply chain based on 45 metrics across five key themes: availability and supply of key raw materials; manufacturing of battery cells and components; local demand for electric vehicles and energy storage; infrastructure, innovation, and industry as well as ESG considerations. The report includes a current ranking for 2022 as well as a forward-looking one to 2027.