As demand for electric vehicles (EVs) soars, spurred by government incentives and a push to decarbonize the transportation sector, the global battery industry is set to attract significant attention and investment. Rystad Energy forecasts total EV sales this year will reach nearly 10 million units, a 43% jump from 2021 sales. On the back of this, demand for battery cathodes and anodes is also set to rocket.

On the current trajectory of EV sales and other Li-ion battery demand, total battery anode materials (BAM) demand will increase 300% by 2025, reaching 2.9 million tonnes from around 774,000 tonnes last year. The cathode market is expected to experience a similar surge. Concerns surrounding meeting demand for these components, however, are not equal.

Cathode manufacturers are worried about the availability of raw materials and the possibility of shortages of critical metals like lithium, nickel and cobalt, while anode producers are more concerned with the underlying nature of the feedstock.

Anodes are primarily composed of natural or synthetic graphite, both of which have unique benefits and drawbacks. A synthetic graphite anode generally has higher efficiency and is of premium quality, supporting higher-end applications. Natural graphite has superior Environmental, Social and Governance (ESG) credentials as its production does not require heavy graphitization—converting synthetic-graphite raw materials into battery-grade materials—which uses vast amounts of energy and increases production costs and emissions.

Today, about 14% of the global BAM feedstock is natural graphite, and 78% is synthetic. However, by 2025, accelerated by increased demand and the ability to ramp up synthetic production quicker and more efficiently than natural production, synthetic graphite’s market share is expected to reach 87%. Rystad Energy’s projections on synthetic graphite growth run contrary to the prevailing market view, but the data—the first comprehensive review conducted in years—has been supported by the largest cell manufacturer, anode manufacturer and an influential Chinese research house.

Battery manufacturers are frantically building production capacity to meet demand. Manufacturers need to go from zero to 100 at breakneck speed, so it’s no surprise that they are leaning toward the more immediate fix, synthetic graphite, despite its inferior ESG implications. Without an increase in synthetic graphite production, it is difficult to see how EV adoption targets can be met in time. 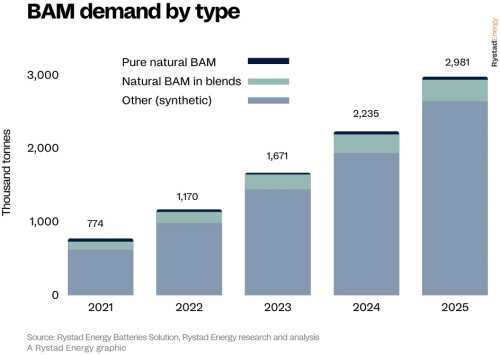 As the continent’s decarbonization efforts pick up steam, the European market will see the most aggressive growth in BAM production capacity. Global capacity is set to grow by an annual average of 38% up to 2025, but Europe’s capacity will grow sizably, albeit from a very low starting point. European total capacity will top 200,000 tonnes in 2025, growing from practically zero this year. 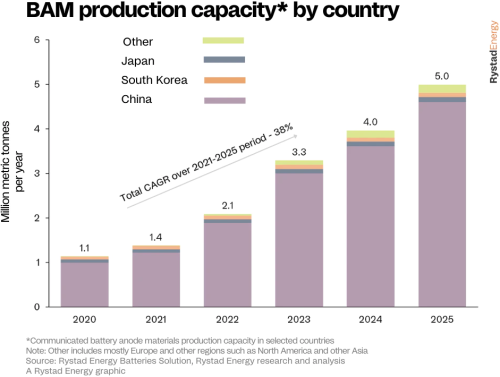 This growth is in line with the plans of several car manufacturers to build gigafactories in Europe, which require a localized supply chain, often resulting in higher prices. Most announced European anode plants are scheduled to use natural graphite as a feedstock due to the material’s ESG advantages, including fewer greenhouse gas emissions and lower operational expenditure. 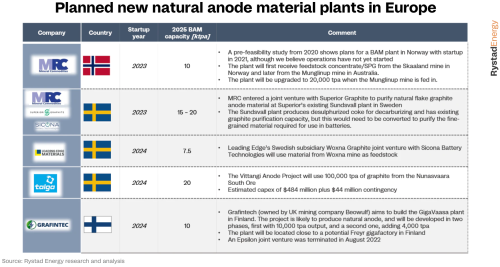 This is interesting, though I am not convinced that EVs will see such leaps and bounds in design upgrades, production increases, and, most importantly => end-sales results in such a tight timeline as indicated. The dominating (or even top 3, and thus commercial worthy) battery types are unclear toward the end of the decade, which will affect all supply lines and facilities. We seem to be missing a comprehensive scorecard (at least with free access) of all the competing battery types (within a decade of commercial realization), what the components would then be needed for each of those types of batteries, and the materials feedstock and technology (and where those are located) for those 'top' systems. The idea that most personal vehicle manufacturers have jumped on board with huge EV promises (quite nobly) under this state of uncertainty is shocking, frankly. But of course, the regulatory anti-ICE environment (appropriately), fear of being left out of market share, and the promising sales predictions, just appeared too enticing.

The problem is that a lot of the 'estimates' are really advertising copy, by interested parties, surveyed to arrive at a consensus, and they always reckon that their tech is pretty wonderful, given only a few more billions of subsidy! ;-)

Bottom up costings are the only real costing exercises, and whilst their figures are always open to question, you can really see where you are with them.

Here is a rather old, 2019, bottom up costing of lithium batteries, with cost projections: